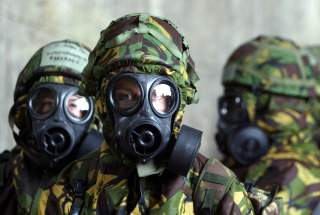 The annual report is by the eight-person Panel of Experts that reports to the UN Security Council. The report is dated March 5, 2018 but appears to have only been released publicly this week. The report notes that the longstanding ties between Syria and North Korea appear to be intensifying as Pyongyang comes under growing international pressure because of its nuclear and missile programs and Damascus continues to fight a civil war.

“More than 40 previously unreported shipments from the Democratic People’s Republic of Korea to the Syrian Arab Republic between 2012 and 2017 by entities designated by Member States as front companies for the Scientific Studies Research Center of the Syrian Arab Republic,” the report states. The Scientist Studies Research Center is responsible for “new research and development of nuclear, biological, chemical, and missile-related technology” in Syria, according to the Nuclear Threat Initiative, a Washington, DC–based NGO. These shipments include chemical weapon and ballistic missile components and have been previously reported by Reuters and the New York Times. Two of the shipments were interdicted and included components that could be used for a chemical weapons production plant.

The relationship between Syria and North Korea is nothing new, dating at least as far back as the 1960s. According to the New York Times, North Korean pilots flew alongside the Syrian Air Force during wars against Israel in the 1960s and 1970s, although the North Koreans were probably flying Egyptian planes.

Pyongyang has also provided significant assistance to Syria’s ballistic missile program. This element of the relationship likely began in the 1980s with the sale of Scud-B missiles to Syria. Next up, North Korea sold Syria its No Dong missile. The No Dong is a medium-range mobile liquid-fueled missile that is believed to have been derived from the Hwasong-6 (Scud-C). North Korea has sold the same missile to Iran (where it is called the Shahab-3) and Pakistan (where is is called Gahuri). According to some sources, Syria began purchasing 150 Nodong missiles from North Korea in the early 1990s, with help from countries like Libya.

Later Syria either purchased the longer-range Scud-D missile from North Korea or got help modifying the Scud-C missiles to give them greater guidance systems and range. These were first tested around the turn of the century, and a later test in 2005 went awry when parts of the missile landed in Turkey. Israel maintained at that time that Syria intended to use the Scud-Ds to deliver air-burst chemical weapons. It is the Scud-D missile that the UN report says Syria is trying to build maneuverable re-entry vehicles for.

North Korea (and possibly Iran) also helped Syria build its own Scud production facilities so it wasn’t entirely reliant on purchasing them abroad. As Eli Lake once reported: “The North Koreans also have helped President Bashar al-Assad to develop a program for the Syrian regime to make the medium- to long-range missiles itself.” Altogether, at the start of the 2011 civil war, Syria was believed to have around 500 Scud missiles of different variants. At that time, it was believed to be capable of producing thirty Scud missiles domestically (although almost certainly relying on foreign parts) each year.

The cooperation runs so deep that Chris Harmer, a former naval aviator, has claimed: “The Syrians would not be able to shoot Scuds without active Iranian involvement and North Korean involvement.” Of course, Syrian forces can shoot their Scuds, which they have repeatedly demonstrated against rebel forces throughout the nearly seven-year long civil war.

Although the missile cooperation is more extensive, the two countries most notable collaboration was the construction of a plutonium-producing nuclear reactor called Al Kibar in rural Syria. When the reactor was still being built, the Mossad—Israel’s intelligence agency—was able to collect photographs from inside the site. “The photographs,” the New Yorker later reported, “showed workers from North Korea at the site.” In addition, “The reactor had many of the same engineering elements as the North Korean reactor in Yongbyon—a model that no one but the North Koreans had built in the past thirty-five years.” Israel later bombed the reactor before it began operating.

North Korea was also instrumental in helping Syria get its chemical weapons program off the ground in the 1990s. North Korea is believed to have one of the largest chemical weapons stockpiles in the world, potentially ranking third to only Russia and the United States. Pyongyang put this capability on display in 2017 when North Korean operatives used agent VX to assassinate Kim Jong-nam—Kim Jong-un’s brother—at a Malaysian airport. Now it appears that Pyongyang is helping Syria reconstruct its program after Damascus surrendered its stockpiles under international pressure during the Obama administration (although not all were handed over to the international community).

Although Syria and North Korea share a common enemy in the United States, it’s likely that North Korea’s primary interest in helping Syria is to get desperately needed hard currency given the ever tightening international sanctions it faces because of its nuclear and missile programs. The exact extent of this ongoing relationship isn’t known publicly.