North Korea is the Mafia: Lessons from the "Kim Jong-un has disappeared" Hysteria 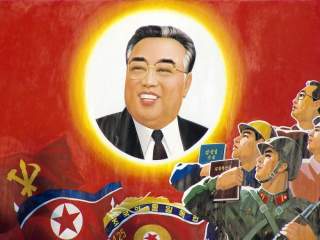 For six weeks, from September 3 to October 14, Kim Jong-un, the leader of North Korea, disappeared from view. The rumors it triggered became increasingly outlandish. He was dead or dying; body doubles were being prepared (a favorite theory about his father); his sister was running the country (a female leader in North Korea?); factional infighting had broken out in the backrooms of Pyongyang; or he had been pushed aside in a coup.

As if to illustrate just how untethered the commentary had become, The Onion ran its own pretty funny mock story.

Now that the 'Young General' is back, the hangover has kicked in. Increasingly, the noteworthy story of the last two months is not Kim Jong-un's disappearance itself, but the explosion of over-the-top media speculation it unleashed, particularly in the West. In South Korea (where I live), the media coverage was obviously sustained, but not nearly as unhinged. I think we can draw a few conclusions from the speculative fun we all had last month:

1. The Kims get sick too, but the regime can stumble on for awhile:

This seems pretty banal, but everyone seemed to forget that Kim Jong-un's father Kim Jong-il suffered from a stroke and disappeared from view for twice as long back in 2008. At that time too, there was some hysteria, but nothing like this time around even though it was longer. I am not sure why.

It is worth noting that the Kims, obviously, lead pretty unhealthy lives. All three Kim monarchs were seriously overweight, if not obese, in their prime. All were rumored to be heavy drinkers and smokers, possibly abusing narcotics. Kim Jong-il's consumption of Hennessey was legend. North Korea even has a semi-formal prostitution service – the “joy brigade” – for its elites, presumably including the top leader. The Kims are the modern versions of the self-indulgent tyrants of antiquity, like Nero, living a lifestyle of gross over-indulgence. Not surprisingly, they have recurrent health issues.

But the state does not fall apart as a result. Presumably even North Korea, focused as it is on the “Sun King,” can muddle through on autopilot for at least a few months, a prediction I made before Kim Jong-un resurfaced. The Kims are the focus of global media attention, but there is a whole cluster of family, retainers, flunkeys, high-ranking Korean People's Army and Korean Worker's Party officials deeply vested in the continuation of the Kim monarchy. If these figures did not turn on each other in a factional power struggle after Kim Jong-il unexpectedly died in 2011, it was hard to see them doing so in these circumstances.

I've often thought a good analogy for North Korea is the mafia. North Korea engages in all sorts of illicit activities, from its well-known proliferation efforts to its less well-known meth operations and insurance fraud. The DPRK is what happens when the godfather and his cronies manage to take over a whole country; the Kims are the Korean version of the Corleones.

In such a structure, all the top players are bound to each other by blood, shared knowledge of each other's criminality and desire to keep the lifestyle and money rolling in. In the same way the Corleone family survived the Don's near assassination and semi-retirement, so will the Kim gangsterocracy. No one (in either family) wants the structure to fall apart because they are all complicit in its awfulness and enjoy its rewards, so the incentives are huge to put the system on autopilot when el hefe is temporarily incapacitated.

2. The media focus too much on the Kims:

Part of the problem must be the unique global media focus on the Kims, and specifically on the leader. In my experience with media as a commentator/talking head, I am routinely asked about the Kims themselves, including their personal habits, their mental state and their absurdities (Kim Jong-il's platform shoes and bouffant hair-style were favorites). The working assumption is often that they're just “bonkers”, as a Sky TV reporter asked me once.

But clearly no country with a large population can function without some manner of institutions tying the society together. And North Korea, in its own unique, gangsterish way, has those. The most important are the Army and the Party (probably, as we don't really know), soldered together by the personal relationships of the extended Kim clan. It is a curiously feudal or patrimonial structure, especially for a state that, in its ideology, formally condemns feudalism as backward and reactionary. It is not “Weberian” or rational. It is massively economically dysfunctional; it led, for example, to the famine of the 1990s. For this reason political scientists often define the DPRK as fragile or brittle and it is regularly near the top of the Fund for Peace' annual Failed State Index.

But North Korea has managed to survive far greater challenges and hurdles than many thought it could overcome. Despite the death of Kim Il-sung, the cut-off of Soviet subsidies, the famines, the extreme isolation following the nuclear tests, the sudden death of Kim Jong-il and Kim Jong-un's disturbing desire to party with Dennis Rodman, the regime lurches on. Clearly there is much more going on that just a sun-king monarchy, however relentless the media focus on the top leadership.

3. The media enjoys the sheer lunacy and freedom to wildly speculate that North Korea opens up:

Perhaps I watch too much media coverage of North Korea, but I am always struck by how “unplugged” North Korea allows otherwise bland media networks and reporters to be. A year ago, wild unsubstantiated rumors circulated that Kim Jong-un's uncle (Jang Song-thaek) had been executed by wild dogs tearing him apart. This “story” originated in some obscure Chinese paper but was quickly picked up by Western media with little fact-checking. Almost certainly, the sheer luridness of it was appealing: North Korea is a black hole, the boy-king is probably bonkers anyway, so sure, why not run that story?

Similar media hype of North Korean kitschy ridiculousness can be seen in the stories about its discovery of a unicorn. Once again, the story went viral (Google it and see), probably for the sheer lunatic fun of reporting on North Korea. It's almost like you can say anything. That must be fun in a way. Consider all those “Kim looking at things” tumblrs. At some point, this is not really news anymore. It's comedy. But they are actually really serious ethical issues about laughing over North Korea, a place where hundreds of thousands are executed or imprisoned in appalling conditions. Remember that next time you hear some gratuitously parodic depiction of North Korea.