North Korea: UN Sanctions Are An "Act of War" 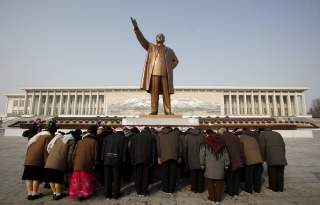 North Korea has declared that the latest United Nations sanctions imposed on the rogue state are an “act of war.” A foreign ministry statement said they were tantamount to an economic blockade, the official KCNA news agency reported.

The move triggered an angry backlash on Sunday from Pyongyang, which threatened to punish countries that supported the measures.

On Friday, the Security Council unanimously imposed new sanctions after North Korea’s recent intercontinental ballistic missile test. These involved limiting access to refined petroleum products and oil, as well as clamping down on its earnings from workers abroad.

But the decision has prompted a tirade from the Hermit Kingdom, which is already reeling under a raft of sanctions from the United States, the UN and the European Union.

“This is a violent breach of our republic’s sovereignty and an act of war that destroys the peace and stability of the Korean peninsula and a wide region,” the foreign ministry statement said.

The resolution seeks to ban nearly 90% of refined petroleum exports to the Pyongyang regime by imposing a stringent cap of 500,000 barrels a year.

Further sanctions include changing the procedure in which North Koreans working abroad can send money home. This has been put back to two years instead of 12 months, which was originally proposed.

In a statement carried by KCNA, North Korea’s foreign ministry accused the US of being terrified by its nuclear force, insisting that Washington was becoming “more and more frenzied in the moves to impose the harshest-ever sanctions and pressure on our country.”

The ministry went on to underline that the Pyongyang government would “consolidate” its nuclear capabilities to combat US “blackmail.”

“We will further consolidate our self-defensive nuclear deterrence aimed at fundamentally eradicating the US nuclear threats, blackmail and hostile moves by establishing the practical balance of force with the US,” the statement went on to say. “We define this ‘sanctions resolution’ rigged up by the US and its followers as a grave infringement.”

Last month, North Korea announced that it had successfully fired a new ICBM, which put the US mainland within range of its nuclear weapons.

This was the just latest round of tests, which have increased tension on the Korean peninsula, and yet another act of defiance after years of Security Council resolutions and rhetoric from Pyongyang.

In November, North Korea demanded a halt to what it called “brutal sanctions.” Washington responded by making it clear it was seeking a diplomatic solution while ratcheting up the pressure on North Korean leader Kim Jong-un.

Nikki Haley, the US ambassador to the UN, claimed that the sanctions went even further than those passed in September. “Today, we cut deeper,” Haley said, according to CNN.

“We repeatedly offered Pyongyang a choice and repeatedly, in its continued missile tests, the regime had chosen the path of isolation. We will continue to match the Kim regime’s choice of aggressive action with actions of international sanctions.”

President Donald Trump was quick to tweet a note after the vote. “The United Nations Security Council just voted 15-0 in favor of additional Sanctions on North Korea. The World wants Peace, not Death!” he said.

The Chinese foreign ministry pointed out that the new resolution also reiterated the need for a peaceful outcome through diplomacy in a move to stabilize the situation.

Global Times, an ultra conservative state-owned tabloid, stressed the sanctions were aimed at preventing war. It also said the US had compromised with no indication that the UN would grant permission for military action against Pyongyang.

“The difference between the new resolution and the original US proposal reflects the will of China and Russia to prevent war and chaos on the Korean Peninsula,” it said in an editorial.