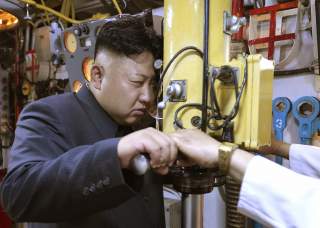 As Ankit Panda at The Diplomat reports, the Sinpo-C could have a submerged displacement greater than 2,000 tons and will likely be the largest vessel ever to be built for the Korean People’s Navy since the Najin-class frigates. It is likely that both the Sinpo-B (Gorae-class) and the Sinpo-C are derived from the elderly Russia submarine’s technology—which ultimately derives from the World War Two-era German Type XXI submarine.

“The continued presence of this object suggests ongoing SLBM ejection tests. If correct, this is likely a continuation of the ejection test campaign reported during July of this year,” the 38 North analysis reads. “Regardless, additional ejection tests should be expected in the future for further development of the Pukguksong-1, a potential Pukguksong-3, or other future SLBMs. Such a test would also be valuable for validating missile launch systems for a new class of SSBs.”

While the new Sinpo-C SSB and its missile are not exactly state of the art compared to the United States or Russian nuclear-powered ballistic missile submarines like the Ohio-class or the Borei, the addition of nuclear-armed submarines would increase the overall survivability of the North Korean nuclear arsenal once the vessels are fielded in sufficient numbers. South Korean and American forces would have to assign additional submarines to find and track the North Korean boomers. Essentially, the vessels complicate the targeting problem for the U.S. and its allies.