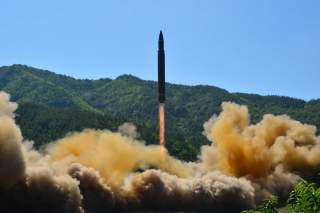 The United States national security community should not infer anything about the performance of North Korean reentry vehicle (RV) technology based on its November 28 test of its Hwasong-15 intercontinental ballistic missile (ICBM).

The HS-15 was launched on a “lofted” trajectory flying 4,500km into space before coming down in the Sea of Japan during the test. However, such a trajectory is not representative of a normal minimum-energy trajectory (MET) that would be used for an operational shot. Indeed, a lofted trajectory puts a lot more stress on an RV than a MET, which could be why early indications suggest the RV broke up—or potentially self-destructed—on reentry.

“We should not infer anything about their RV technology from this test for several reasons,” Vipin Narang, an associate professor of political science at the Massachusetts Institute of Technology told The National Interest.

“First, the steeply lofted trajectory alone puts such different stresses on an RV than a normal trajectory, that it would be downright terrifying had this RV actually survived reentry. Although this may have broken up, we should not assume that it necessarily would on a normal trajectory. Second, it may have been a shroud or a mock RV that was not designed to withstand reentry at all. Third, it might have self-destructed. These latter two points are because North Korea may not want us to recover any real reentry debris for analysis.”

Joshua H. Pollack, editor of the Nonproliferation Review and a senior research associate at the James Martin Center for Nonproliferation Studies, told the National Interest that he agreed with Narang.

“Allegedly, the RV on the HS-15 didn’t survive all the way down. I can’t confirm that, but also don’t read anything into it either way. A lofted test is not representative of conditions on a standard, minimum-energy trajectory,” Pollack said.

“What’s more, an RV doesn’t survive the detonation, which presumably takes place in the air. I don’t know what sort of mechanism may have been on the test payload; they claim to have tested detonation systems for nuclear weapons on some earlier flight-tests. So, I feel unable to draw any conclusions from these reports.”

The problem for analysts and the U.S. intelligence community (IC) is the lack of reliable information about North Korean ballistic missiles.

“We don’t know what the state of their RV technology is,” Narang said.

“Can they reliably and accurately deliver a thermonuclear warhead to the Continental United States? Maybe not. Can they probably or plausibly do so? Are you willing to bet New York to find out? There is only one way for them to truly prove that they’ve mastered the RV is with a Juche Bird test, and that’s a particular delight I think we would all like to avoid. I, for one, am willing to largely take their word for it.”

Given the sheer destructive power of a nuclear weapon, policymakers are not willing to bet millions of lives on the chance that North Korea’s weapons won’t work or that missile defenses might intercept an incoming ICBM.

“Judging whether it’s good enough for ICBM ranges isn’t my bag, but the Soviets figured it out in the 1950s. It’s not beyond the North Koreans to do so now. They’ve tested them on the ground and in flight and have thus had opportunities to evaluate them and make design tweaks if needed,” Pollack said.

“There is a tendency to grasp at straws and insist that they’re not ‘there’ yet; tell that to people in Seoul and Tokyo…What I can say with pretty good confidence is that they are capable at this, and it matters to them. Any kinks they haven’t smoothed out, they will before long.”

There are some indications that North Korea is not quite at the point where they have an operational RV, but Pyongyang is very close.

“Ankit Panda [a colleague at The Diplomat, an outstanding reporter and expert on missile technology] reports that the US IC believes the reentry vehicles on July 28 and November broke up as they reentered,” Jeffrey Lewis, director of the East Asia Nonproliferation Program at the James Martin Center for Nonproliferation Studies at the Middlebury Institute of International Studies at Monterey told the National Interest.

“Based on a close analysis of the data from the July 28 test, it does seem likely that something went wrong. The object in the video is not behaving like a successfully reentering RV, certainly not the one that the North Koreans have shown us.”

At least with the earlier July 28 test—no data is available yet about the November 28 test—the RV started to tumble.

“North Korea is lofting its missile tests and there are reasons that lofting may lead to instability.  If the problem is arising from lofting, then the reentry vehicle might survive on a more normal trajectory toward the United States. On the other hand, if the cause of the tumbling is something different, the problem may also occur on more normal trajectories.”

More data will likely become available when (and it is almost certainly a when rather than an if) North Korea tests another ICBM.

“If the North Koreans were to test the reentry vehicle on a MET into the ocean, then we might have a better idea,” Martin said.

“But who wants that?! I am inclined to take their word for it. After all, there is no case of a country that successfully designed an ICBM but could not manage reentry. This is not the technical barrier I would want to bet my life on.”

Indeed, Pollack said that he believes that we might see a so-called Juche Bird live fire ICBM test in the near future.

“I expect them to test this missile into the Pacific before long, so we may get a look at an ICBM’s performance on a more ‘realistic’ trajectory,” Pollack said.