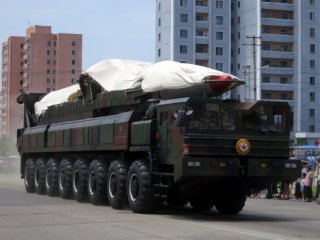 North Korea has staged a string of test launches of its intermediate-range Musudan ballistic missile this year, the latest apparently just this morning. All six have ended in failure. As decades of failures have shown, it's never easy to get rockets of any purpose to work reliably. But the recent North Korean launches give insight into events inside the Musudan program that go well beyond engineering.

There's a standard modus for dealing with launch failures, whether the payload on top is a satellite or a warhead. You collect all the data you can find, sometimes literally picking up the pieces of a failed launch. A failure investigation then begins. As with air crash investigations, this can take months. Then remedies must be implemented. Sometimes a rocket goes through a minor design change, or more attention is applied to manufacturing or launch preparations. Other rockets in the same family are typically 'grounded' while this process unfolds. It can take six months or more before the next rocket is deemed fit for launch.

North Korea didn't wait very long between Musudan launch tests. The first was made to coincide with the birthday of Kim Il Sung on 14 April. On 28 April they tried again. Two Musudans were launched this day. Both failed. On 31 May, another Musudan test failed. The latest tests (at the time of writing) took place earlier today, when two missiles were launched in less than three hours. The final launch apparently flew for roughly 400km, further than its predecessors but still well short of its suspected range. This analyst does not believe the flight was deliberately intended to be a short-range firing. The Musudan is believed to have an intended range of somewhere between 2500-4000km.

Engineers would object to such a rushed launch schedule, which does not give enough time for proper analysis or corrections. Clearly, North Korea's engineers have been overruled by their political masters. This suggests desperation and a strong degree of impatience on the part of North Korea's leadership for a successful flight of this missile, which has the potential to alter the strategic calculus of the region.

Ironically, this impatience has probably contributed to the failure of these test launches, much like the fairy tale of the goose that laid golden eggs. Exactly what happens next is unclear, but certain political intermediaries who have oversight of the program could face a bleak future. North Korea would presumably judge that executing or imprisoning key technical personnel would derail their missile development. Then again, politics has already grossly interfered with engineering. Nobody knows what else is happening beyond our view.