North Korea's New ICBM Can Only Mean One Thing 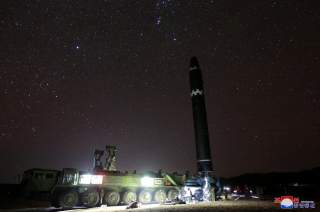 Does North Korea’s recent successful Hwasong-15 intercontinental ballistic missile test on November 28 prove that Pyongyang has achieved nuclear deterrence against the United States? Analysts disagree on that point, but there is consensus on the need to achieve a diplomatic solution to the North Korea problem.

“We should NOT leap to that conclusion,” Ken Gause, director of the International Affairs Group at CNA Corps’ Center for Strategic Studies and one of the leading experts on North Korea, told The National Interest.

“This test only showed a moderate increase in the flight distance of the missile (over the tests in July). It revealed nothing on miniaturization of a warhead, whether that warhead can be mated to an ICBM, reentry capability, or targeting.”

Gause said that everything he has seen thus far suggests that North Korea is still a ways off from having developed a fully operational deterrent capability against the United States.

“I suspect we are one to two years away from North Korea having a full up nuclear deterrent with an ability to strike the United States,” Gause said.

“Up to that point, we should be focused on diplomacy and engagement to determine whether a freeze is possible. Pressure alone will not yield these answers and will not prevent North Korea from moving forward with its nuclear and missile programs.”

Vipin Narang, an associate professor of political science at the Massachusetts Institute of Technology told The National Interest that while North Korea might not have perfected its ICBMs or its reentry vehicles (RVs), functionally Pyongyang has a deterrent.

“People can still have doubts about the RV’s heat shield and ability to withstand reentry stresses, but I wouldn’t bet New York on it,” Narang said.

As Narang explained, even a small chance that a nuclear missile might hit an American population center makes a confrontation with North Korea extremely risky.

“They have demonstrated missile range and signaled that they can develop a compact fission device and some form of a thermonuclear device,” Narang said.

“Can they deliver it with reliability against the United States? Maybe not, but even a 30 percent chance that it lands on the East Village is too high a price to pay. This is not even to mention the regional targets that they can hold at risk with certainly the fission device.”

“If we continue to doubt their ability to deliver a nuclear warhead on an ICBM, they may just show us… with a ‘Juche Bird’ atmospheric nuclear detonation over the Pacific delivered on top of one of the ICBMs,” Narang said. “Which is really risky for everyone…”

Hans Kristensen, director of the Nuclear Information Project at the Federation of American Scientists, told The National Interest agreed with both analysts.

“I have not seen Intelligence statements that North Korea has a functional deterrent at this point, only that they’re close and might potentially achieve it sometime next year. But it, of course, depends,” Kristensen said.

“Regardless, they certainly have a physiological deterrent because no one of sane mind would want to gamble that they don’t yet have some operational capability. In that case, it would most likely be for one of the medium-range systems such as Nodong, whereas an operationally functioning ICBM probably will take more flight testing of a functioning RV in a more realistic trajectory.”

All of the analysts agreed that the United States has to shift towards a deterrence posture and aim for a diplomatic solution.

“From now on it’s about deterring North Korean use, avoid doing something stupid that makes things worse, and trying to defuse and resolve the situation.”

To resolve the situation, diplomacy will be key. Gause suggested that some sort of backchannel negotiations might be a way to break the current impasse—but America would have to drop the fiction that denuclearization of the Korean peninsula is a possibility.

“We will need to have some backchannel discussions,” Gause said. “Make it clear that there are no preconditions. Drop the denuclearization demands.”