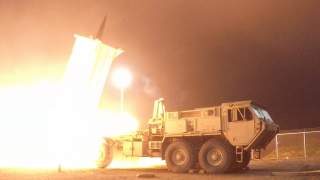 In the spring of 2017, the United States began deploying Terminal High Altitude Air Defense missile batteries to South Korea. The expensive THAAD system is designed to shoot-down ballistic missiles on their terminal trajectory as they plunge down their targets.

While North Korea will likely soon possess missiles that can reach the West Coast of the United States, South Korea has for decades been exposed to North Korea’s large and diverse arsenal of tactical and intermediate-range ballistic missiles.

However, THAAD is controversial. Beijing opposes it, as do many people in South Korea. Both the South Korean and American presidents have at times supported or questioned its deployment.

Therefore, it’s significant that Seoul is working to deploy its own, indigenous ballistic-missile defense shield called the Korean Air and Missile Defense network, which will function independently of the United States.

This multi-layered system is designed to engage targets at different altitudes and stages of their trajectory — not only to counter different types of ballistic missiles, but to give the defenses more than one opportunity to thin out an incoming barrage.

The new shield will give Seoul defenses it can rely on regardless of shifting political winds at home or abroad—and a key ingredient appears to be Russian missile technology.

The latest addition to South Korea’s air defenses is the KM-SAM Cheongung medium-range surface-to-air missile system and its new PIP missile interceptor, a “hit-to-kill” weapon that relies on the 880-pound missile colliding with its target, rather than detonating a warhead in its vicinity. A proximity-fused anti-aircraft variant is already in service.

In the spring of 2017 the PIP missile began its final tests, during which it shot down five of five practice ballistic missile targets. The Korean military announced in June 2017 that it would begin full-scale production of the missile at a price of $1.3 million each, with completion of the order by 2018 or 2019.

The KM-SAM stems from cooperation with Russia dating back to 1992, when Seoul first acquired radar technology from Moscow. By 1998, South Korean firms including Samsung and LIG Nex1 began developing the KM-SAM based on design elements of the formidable Russian S-300 and later the S-400 surface-to-air missile systems, though Cheongung is a shorter-range system.

In fact, the Russian collaborator, missile-design firm Almaz-Antey, made its own higher-capability version of the Cheongung called the S-350 Vityaz, a battery of which was reported in Syria in September 2017.

A Cheongung battery can hit targets as high as 50,000 to 60,000 feet and defend a 25 miles radius. Each unit includes a truck-mounted multi-function Passive Electronically Scanned Array radar that can track, and identify and generate targeting data for targets within 60 miles. The blocky three-dimensional can track at least 40 contacts at once, and is hardened verses electromagnetic pulses such as could be generated by a nuclear blast.

Firing solutions are relayed from the battery command vehicle to up to six Transporter-Erector-Launcher vehicles with eight missile cells each. The KM-SAM missiles, measuring 275 millimeters in diameter, apparently owe much to the shorter-range 9M96 missiles used in the S-400 SAM system, especially the vertical cold-launch technology.

This means that the missiles are ejected from launch tubes using compressed gas before igniting their rocket motors, giving them better environmental tolerance limits and causing less danger to nearby personnel and terrain during launch.

The KM-SAM uses tiny lateral compressed gas thrusters to orient itself towards a target during liftoff. This saves time and kinetic energy, as the launcher does not need to swivel around and the missile can begin accelerating towards its target immediately at the launch phase. You can see the startling movement of a KM-SAM’s gas thrusters at launch at 1:43 and again at 5:01 in the video below.

Soaring at speeds between Mach 4 and 5, the missiles receive midcourse adjustments from the battery radar, and upon closing within short range of a target, switch to a heat-seeking active homing mode for the kill.

The takeoff thrusters can also assist in making maneuvers during this terminal stage. The agile munitions could prove very difficult to elude. They can pull up to 50 Gs, are resistant to radar jamming and possess a low heat-signature, making them difficult to detect.

Also new to South Korea are American-made Patriot PAC-3 MSE missiles. Earlier variants of the Patriot performed less than perfectly in the missile defense role against Iraqi Scuds during the 1991 Gulf War, a job its proximity-fused warheads were not optimized for.

In December 2016, South Korea began upgrading its eight batteries of PAC-2 anti-aircraft missiles to also fire the PAC-3 MSE variant, which trades out the explosive warhead for a guidance-radar which is precise enough for hit-to-kill interception, transforming it into a shorter-range missile-defense weapon.

The PAC-3 MSE missile will form the inner layer of the KAMD. The Mach-4 missiles can protect a 15-to-20-mile radius against theater ballistic missiles, but is not thought to be capable of reliably intercepting intermediate-range ballistic missiles.

The missile batteries count on two ELM-2080 Green Pine phased array radars purchased from Israel in 2009 to serve as their long-range eyes. Seoul announced it was purchasing an additional two in April 2017.

These can detect missiles launches within 500 miles as soon as they lift off. Furthermore, the land-based radars are networked with the powerful SPY-1D radars on South Korean Sejong the Great-class Aegis destroyers at sea.

These vessels may also contribute their air-defense firepower to the KAMD using SM-2 missiles, as well as possibly more capable SM-3 or SM-6 missiles in the future. There are also reports that the KAMD has been given access to U.S. satellites and radar networks.

When combined, the early warning provided by these long-range radars would allow the shorter-range radars of the KAMD missile batteries to be cued into position to acquire firing solutions as soon as the incoming missiles enter range.

The KAMD still needs a top-layer to defend against fast, high-flying missiles. Nearly $1 billion dollars has been devoted to the L-SAM or Cheolmae-4, which is scheduled for completion in 2022 with deployment of four batteries to follow a year or two afterwards.

The new project has been nicknamed the K-THAAD due to its planned long range of 25 to 93 miles and ability to hit targets high as 200,000 feet. Still, this would be less than half the maximum altitude of THAAD, and it appears the L-SAM will be a mid-course interceptor designed to swat higher-flying ballistic missiles in the cruise phase before they begin their terminal descent. This means that the L-SAM and THAAD would complement rather than overlap in capabilities.

Reports suggest the L-SAM will be based again on S-400 technology, and some analysts suggest its missile will use a South Korean development of its long-range 48N6 missile. The Russian missile can attain speeds between Mach 8 and 14, sufficient to intercept intermediate-range ballistic missiles. Furthermore, the L-SAM will use an S-band AESA radar just like the 91N6E Big Bird on the S-400 does.

However, the 48N6 missile is designed to shred aircraft at long range using a proximity warhead rather than disintegrate fast-moving missiles through kinetic impact, so substantial modifications would be necessary to optimize the design for a missile-defense role.

Missile shields are the new normal

Both Japan and the United States are under threat of North Korean missile attack, and have prepared their own defenses. In Japan’s case, these involve a combination of PAC-3 Patriot missiles for point-defense and long-range SM-3 missiles mounted on Japanese destroyers and ground-based installations.

To protect the United States from potential intercontinental ballistic missiles from Pyongyang, there are several dozen interceptor missiles in Alaska and California serving in the Ground-based Midcourse Defense system, which has had a spotty record in tests.

Ballistic Missile Defense systems are increasingly common across the globe. Saudi Arabia recently purchased THAAD, India has its own BMD interceptor program, Russia is developing the S-500 for the missile-defense role and Israel has its Arrow-3 ABM.

It’s easy to forget that at the turn of the century, few countries had serious ballistic missile-defense capabilities due to the 1972 ABM Treaty, which the U.S. withdrew from in 2002. One fear was that a defense system might make national leaders overconfident, giving them a false impression that a missile shield would reliably defend against attack.

That problem seems unlikely in the case of the South Korean government, with its capital just 35 miles south of the North Korean border. Not only does Pyongyang possess so many missiles that shooting down all of them is unlikely, but the North Korean has many conventional and rocket artillery systems that could wreak considerable devastation on the border area, including the capital city Seoul.