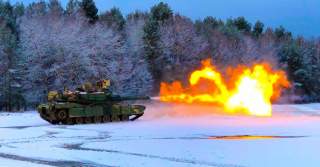 With the U.S. defense budget set to expand in the coming years as the great power competition between Russia, China and the United States heats up, Northrop Grumman—like other defense contractors—is starting to invest in the future after a prolonged slump.

“We foresee just given the nature of the threat environment that we observe around the globe today and the number of dimensions in that threat environment that are evident, we foresee a period of time here in front of us, a rather significant period of time in front of us, where our nation and our allies are going to need to invest in their national security to deal with this,” Wes Bush, chairman and chief executive officer of Northrop Grumman told investors. “And those investments in many cases are going to be different types of investments and at the national level to ensure technological superiority, and we've got to get back to a place of technological superiority.”

However, reclaiming America’s technological lead will take more than incremental improvements in U.S. factories. It will take serious investment. “When you're talking about doing that type of thing, you can't just patch up your old facilities and do this incrementally,” Bush said. “You have to step back and say, what is the capacity that industry needs to support the customer-strategic objectives here? And it's causing all of us to look carefully at our factories, it's causing us to look at the capacity that we have for our employees to do work in a much higher technology arena than may have otherwise been considered, and it's causing us to add employees.”

Northrop is investing in both people and in new tooling to make sure the company is up to the challenge. “We hired over 8,000 people last year. That's not net, that was our hiring,” Bush said. “We have an ongoing wave of retirements across our industry and those were evident in our company as well, but we netted well over 2,000, pushing into 3,000, people last year and we did the same thing the year before. And this is just a reflection of the fact that our industry is gearing up to support the nation's needs and the needs of our allies.”

Indeed, the company is not just investing in American capability but also in allied partner nations who, together with the United State, form the backbone of the liberal international order. “Our investments are not only here in the U.S., they are in other countries around the globe where we're doing business, and our allies depend on us to do the things we need to do from a facility and tooling and capability perspective so that we can support them as well,” Bush said.

Long term, Northrop Grumman’s investments of capital into its people and facilities should pay off. “From an investor standpoint, this ought to be seen as good news,” Bush said. “This is industry saying, we see a runway of business in front of us, and thereby good returns in front of us if we're doing it smartly, that necessitates these investments and we think it's a smart thing to do.”

But the return for investors won’t come overnight given the long cycle times that are inherent to the defense industry. “It won't all happen tomorrow. That's not the nature of our business,” Bush said. “It's a long-cycle business, but it's what we need to do to be well-positioned to support our customers and to enjoy the economic benefits of doing well for our customers for the long term, and that's the way we're thinking about it.”