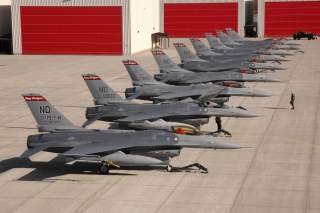 The new active electronically scanned array (AESA) radar was recently selected by the U.S. Air Force to upgrade an initial batch of its F-16s. The Pentagon order opens the door to further domestic and international order for SABR.

“In addition to the international F-16 upgrades currently in production, we are now in the engineering, manufacturing and development phase of the U.S. Air National Guard F-16 upgrade program, which we expect will be followed by an upgrade of 72 AESA radars,” Wes Bush, Northrop Grumman chief executive officer told investors on July 26.

“SABR extends the operational viability and reliability of the F-16, and provides pilots with 5th generation fighter radar capabilities to counter and defeat increasingly sophisticated threats. We foresee a robust growth opportunity for SABR going forward.”

The SABR—which can be adapted to a number of aircraft—is primarily aimed at the enormous fleet of F-16s that exist worldwide.

“SABR is specifically right now targeted to the F-16, and as you know, there's a lot of F-16s out there,” Bush said.

“So, the question obviously is how far this goes. How many of those would be aligned on this type of replacement and it's kind of hard to tell.”

The initial signs are very promising for both Northrop Grumman and Lockheed Martin.

“It's a little hard to call right now,” Bush said

“I would just say that the adoption that we've seen so far has been great, both domestically – primarily domestically, but the international interest on this is significant. We have a good partnership with Lockheed Martin on this, where both companies are committed to continuing to make the F-16 a very strong capable platform for a long time. And we just have to see where this goes.”

The complicating factors for Northrop are that there are rival F-16 upgrade products on the market including Raytheon’s AN/APG-84 Raytheon Advanced Combat Radar (RACR) and the limited budgets available to governments around the world.

“We'll have to see how many of the services that are deploying F-16s are aligned on those types of upgrades versus other alternatives of a different aircraft they might be looking at,” Bush said.

“And obviously, there's a budget and affordability side of this.”

Overall, the advantage of an AESA over mechanically scanned radars is abundantly clear.

“If I were an F-16 pilot and I was offered the opportunity to go up against the adversary in an aircraft with a SABR versus an aircraft that didn't have one, I know which one I pick,” Bush said.

Ultimately, given that the F-16 will be in service for decades to come, upgrades will be necessary—that’s just a fact of life. AESA upgrade packages such a SABR have a bright future ahead of them.