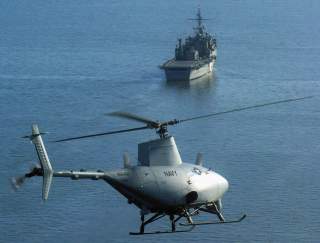 The Navy and Northrop are upgrading software designs for the Fire Scout drone to harden its technology and secure video feeds from intrusion.

“As part of our software development and sustainment process, we always assess our cyber risk posture and incorporate changes, where cost effective, to mitigate cyber risks,” Dodge said.

Work will be performed in San Diego, California, and is expected to be completed in December 2017. The contract was not competitively procured, in accordance with federal acquisition regulations.

“NGC is the only source that has the technical data, support experience and detailed knowledge of the Fire Scout to meet (Navy) requirements without causing unacceptable delays in the operational needs of the fleet,” Dodge says.

The Fire Scouts are integral to operations that involve the Navy’s Littoral Combat Ship (LCS) fleet, providing significant additional intelligence, surveillance and reconnaissance. But the service also has started to look at incorporating the unmanned aircraft with other ships, including destroyers.

One of the selling points for the new DDG 1000 Zumwalt-class destroyer, for example, is the potential for increased air operations, including Fire Scouts. The new warship is designed to accommodate up to three of the MQ-8s.

Fire Scouts have even operated off U.S. Coast Guard vessels.

The Navy now has a bank of Fire Scouts it purchased in advance of getting its full complement of Littoral Combat Ships into the fleet.

The drone could give the Corps real-time, weaponized ISR. The Marines had intended to put the Fire Scouts on L-class ships, which is the same they have used for RQ-21 Blackjack UAV operations.