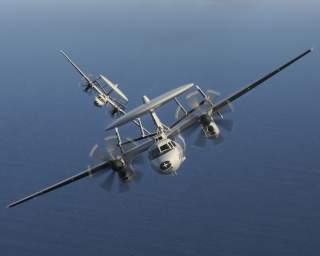 The ability to receive fuel addresses one of the few shortcomings of the new airborne surveillance plane, which acts as the airborne eyes and ears of a U.S. Navy carrier strike group. Indeed, the E-2D is the centerpiece of the Naval Integrated Fire Control – Counter Air (NIFC-CA) battle network, which will eventually allow every platform in the strike group to seamlessly act as either a sensor or shooter.

The addition of the aerial refueling capability will allow the E-2D to provide longer on-station times at greater ranges, extending its mission. According to Northrop Grumman, the new upgrade includes the probe and associated piping, electrical and lighting upgrades and “long endurance seats that will enhance field of view in the cockpit and reduce fatigue over longer missions.”

The E-2D’s aerial refueling capability has under development since 2013, when the Navy awarded Northrop Grumman an engineering, manufacturing and development (EMD) contract. Testing—which will include three modified aircraft—will continue through 2018. The Navy expects to start a production cut-in in 2018 and start retrofits that year.

The E-2D is a particularly important asset for the U.S. Navy because of its state-of-the-art radar—as Rear Adm. Mike Manazir, then the Navy’s director of air warfare, described the concept in detail to me and my good friend Sam LaGrone at the U.S. Naval Institute just before Christmas in 2013. The E-2D is the Navy’s primary means of defending against low-observable cruise missiles, ballistic missiles and enemy aircraft. And, indeed, given the capabilities of its UHF-band radar, the E-2D may be the Navy’s trump card against future Russian and Chinese stealth aircraft.

That would include aircraft like the Chengdu J-20, Shenyang J-31, Sukhoi PAK-FA and, indeed, the United States’ own Lockheed Martin F-22 Raptor and tri-service F-35 Joint Strike Fighter. Only very large stealth aircraft without protruding empennage surfaces—like the Northrop Grumman B-2 Spirit or the forthcoming Long Range Strike Bomber—can meet the requirement for geometrical optics regime scattering. Effectively, that means the E-2D’s AN/APY-9 radar can see stealth aircraft like the J-20 or J-31.