Not Made in America: Why the U.S. May Need to Import Foreign Weapons 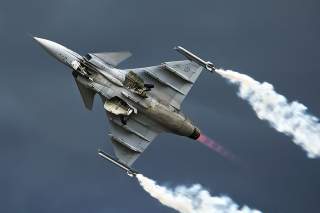 President Trump wants “made in America” to be our new national motto. But what if U.S. weapons are so inferior to those of other nations that America will need to import foreign arms to obtain the best technology?

It seems like every other day, some expert is warning us that America is in danger of becoming second best in military technology, usually as justification for more defense spending or for buying some expensive weapon. But the latest study comes from the Congressional Research Service—Congress’s research arm—which is generally regarded as one of the more nonpartisan of Beltway institutions.

While Russia is developing the advanced T-14 Armata tank, the United States is still using the same Abrams tanks and Bradley infantry carriers from the Cold War, and fielding of their successor—the Next Generation Combat Vehicle—won’t be until 2035 at best. “There is a possibility one or more upgraded or newly developed foreign ground combat systems could emerge and surpass its U.S. counterpart,” CRS reports.

The report points to numerous areas where U.S. armored vehicles either fall short or at least have lost their technological edge:

• While better sensors such as thermal sights gave U.S. armored vehicles an edge in conflicts such as the First Gulf War, now they are standard equipment on the vehicles of many nations.

• Countries such as Russia and Israel are already fielding active protection systems, or APS. However, “the U.S., despite a long-standing interest in APS, has yet to field an existing system or a developmental one,” CRS notes. “APS is seen as a means, in conjunction with vehicle armor, to enhance crew survivability from an ever-growing range of threats. Some tanks, including the Israeli Merkava Mk 4 and, reportedly, the Russian T-14 Armata are designed around an integral APS as opposed to having a system retrofitted to the tank which is generally considered a sub-optimal solution.”

• The Bradley’s twenty-five-millimeter cannon is smaller than the thirty- and forty-millimeter weapons found on other infantry fighting vehicles, and may lack the space and power for an active protection system.

America was fortunate during the Cold War and the Persian Gulf Wars that it didn’t face cutting-edge equipment; “monkey models” was what the Soviets called the stripped-down versions of the weapons they sold to their Third World clients. But CRS points out that Russia and China are exporting advanced weapons. So even in a conflict against a minor nation, the United States could face sophisticated arms such as the Russian T-90 and Chinese MBT-3000 tanks.

In the normal course of things, even if the United States were falling behind in tanks or some other weapon, it would normally catch up by devoting more resources for development and acquisition. But U.S. weapons development and procurement has become so glacial—the F-35 fighter is just entering service now, more than twenty years after the first development contract was awarded—that it takes decades to develop a new tank.

Which in turn in raises the sensitive issue of whether America will need to buy foreign weapons to remain militarily competitive. “The rise of increasingly capable foreign ground combat systems,” CRS says, “the length of time it takes to develop and field a major combat system under current DOD acquisition regulations, and ongoing and anticipated defense budgetary constraints might present policymakers with an opportunity to re-visit the viability of acquiring existing state-of-the art foreign ground combat systems and modifying them to meet Army requirements as has been done in the past.”

To some extent, this problem was inevitable. Weaponry is the most diffuse of technologies; whether tanks or night vision sensors, what one nation fields, others will soon copy. It is the blindest of patriotism to assume that American arms are the best simply because they are American.

Nor would this be the first time America has imported weapons before. The Pentagon uses Israeli drones and Swedish antitank weapons, while too many spare parts for American military hardware are today made in China.

But what’s really troubling is CRS’s observation that “there appears to be a degree of resignation” among the U.S. military that it will fall behind in the arms race. It’s not unnatural for armies throughout history to fear that the enemy is stronger and better equipped: there always seems to be a “Missile Gap” somewhere. But for the United States, which since World War II has prided itself on having the world’s most advanced technology, it’s quite a comedown.