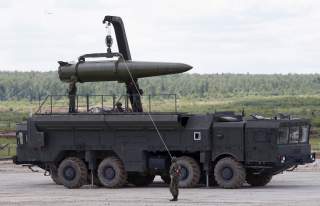 The United States has revealed which Russian cruise missile Washington believes is in violation of the landmark 1987 Intermediate-range Nuclear Forces (INF) treaty.

Speaking at the Wilson Center on November 29, National Security Council official Christopher Ford revealed that the weapon is in fact the Novator 9M729—which carries the NATO designation of SSC-8. The land-based cruise missile is thought to have a range that falls between 500km and 5,500km, and is therefore illegal under the terms of the treaty, which turns 30 year old today (December 7). Many analysts like Jeff Lewis have long suspected that the INF-busting weapon in question is the 9M729, but until Ford confirmed their suspicions, there was no official word from the United States government.

The only thing scholars and analysts had to go on was a cryptic paragraph in the U.S. State Department’s April 2017 Adherence to and Compliance with Arms Control, Nonproliferation, and Disarmament Agreements and Commitments report. There were no other details available.

“The United States has determined that in 2016, the Russian Federation (Russia) continued to be in violation of its obligations under the INF Treaty not to possess, produce, or flight-test a ground-launched cruise missile (GLCM) with a range capability of 500 kilometers to 5,500 kilometers, or to possess or produce launchers of such missiles,” the report states.

While the White House has chosen to reveal the designation of the 9M729, it has revealed almost nothing else about the Russian weapon or its capabilities. Pavel Podvig, director of the Russian Nuclear Forces Project, suspects that there are two possibilities.

“Given that the United States seems to be very confident in its conclusion about the range capability of the 9M729 missile, we should assume that it has good information about it,” Podvig wrote. “Who knows, maybe U.S. intelligence has detailed blueprints of the missile and all its technical characteristics. Maybe the documentation shows that extending the range of the 9M728 Iskander-M is just a matter of filling the fuel tank full.”

Another, more likely possibility in Podvig’s view, is that the 9M729 is closely related to the Russian Navy’s Kalibr-NK land-attack cruise missile.

“The 9M729 missile is almost identical to a missile that was tested at the INF range, probably to the sea-launched Kalibr,” Podvig wrote. “As I understand, the United States observed a test of a missile from a compliant launcher (that would be an SLCM test) followed by a test (of presumably the same or a very similar missile) from a non-compliant one.”

If Podvig is correct, then the Russians might have enough grounds for plausible deniability. “Russia can still insist that these missiles were sufficiently different and that it is therefore in full compliance,” Podvig wrote. “But proving that would be quite difficult, especially if 9M729 is indeed capable of exceeding the 500 km threshold of the INF Treaty.”

If the United States somehow coaxes the Russian back into compliance with the INF Treaty, there is likely another problem for Moscow. “The United States appears to believe that the 9M729 missile uses the same Iskander-M launcher,” Podvig wrote. “If 9M729 was tested from an Iskander launcher even once, all these launchers will have to be eliminated. And that seems to be the case.”

It seems unlikely that the Russians will go back into compliance with the treaty. For the Russians, the INF treaty might simply have outlived its usefulness given some of the other threats Moscow faces in the East.