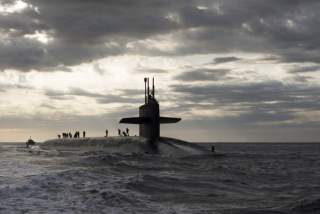 Last week in Beijing, China celebrated the 70th anniversary of the end of World War Two with a massive military parade. Examples of modern military equipment, such as the DF-21D ‘Carrier Killer’ missile, were displayed in public for the first time.

However, a significant new capability that is moving from a lengthy testing phase to active deployment could not be shown in Tiananmen Square: the Type-094, or what will likely be China's first actively deployed ballistic missile-carrying nuclear submarine (SSBN).

In the Indo-Pacific, China is not the only regional power that is investing in these powerful, complex and expensive strategic platforms. India, and potentially Pakistan and North Korea, are also at various stages of development. Among the three, India's program is the most advanced, with New Delhi launching its first SSBN, the INS Arihant in 2009. A second and third are also under construction.

In a new Lowy Institute Report, Nuclear-armed submarines in Indo-Pacific Asia: Stabilizer or menace?, Rory Medcalf and I argue that over the long-term, SSBNs could reduce the risk of major war in the region, as no adversary would want to strike first against a country with so invulnerable a nuclear arsenal.

But before this contribution to strategic stability can be made, nuclear-armed submarines will likely usher in period of initial instability, as India and China begin deploying them without the full command and communication systems, crew training and doctrine necessary for their credible operation.

Another risk is that the deployment of these platforms could also exacerbate existing regional maritime tensions and help drive conventional arms races.

It's generally considered that during the later stages of the Cold War, U.S. (and NATO) as well Soviet SSBNs reduced the likelihood of nuclear war. This is because SSBNs provide an 'invulnerable' second-strike—if one side intended to launch a surprise nuclear first-strike against the other, they would be deterred by the existence of nuclear-armed submarines, a platform that is protected through its ability to remain mobile and relatively undetectable in the world’s oceans.

But during the early periods of the Cold War, when SSBNs were first introduced by the Soviet Union and the U.S., technical limitations forced them to patrol close to enemy shorelines, making them vulnerable to anti-submarine warfare and tracking. Some of these same limitations, such as short patrol ranges, loud acoustic signatures and limited range of their ballistic missiles, are now also present in the programs of China and India, making their deployment potentially destabilizing in the short-term.

Thus, at this stage, there are five key areas of risk associated with the proliferation of sea-based nuclear weapons in the Indo-Pacific:

For SSBNs to conduct a credible deterrence patrol, nuclear warheads must be mated to their ballistic missiles in the submarine, ready to fire. This would represent a significant organizational and readiness change for both India and China. India's nuclear warheads are generally considered to be controlled by a civilian agency, and China's nuclear arsenal has traditionally been kept by the PLA's Second Artillery Corps. Active SSBNs would require the navy's of both countries to exercise a degree of control over their nuclear weapons, and those weapons would be at a higher readiness than they are currently.

Credible SSBN forces place huge demands on command structures, and need survivable communication systems. Transmitting through water at long ranges is difficult, and is done through large vertical very-low frequency and extremely-low frequency stations. However, there is no evidence yet that India or China have begun investing in the airborne communication systems necessary for undertaking credible deterrence patrols. Additionally, the commanders and crews of these submarines will not have much experience in long-range patrols without direct communication with their national command authorities.

The number of submarines in the Indo-Pacific is growing. Collisions, particularly between a tailing submarine and its target, occurred repeatedly during the Cold War, with some sources placing the number between 20 and 40. These sorts of situations could lead to miscommunication and increased tensions at a time of crisis.

Nuclear deterrence does not exist in a vacuum. The introduction of SSBNs in the Indo-Pacific by India and China will cause reactions from the conventional maritime forces of other regional powers. Investment in anti-submarine warfare and surveillance capabilities, and well their deployment, will be a higher priority. SSBNs could also help drive regional maritime tensions in areas like the Bay of Bengal and the South China Sea. One motivation for China's island-building activity in the South China Sea could be to create a 'bastion' for its SSBNs where it could expand infrastructure, like Sound Surveillance System networks, to help disrupt U.S. monitoring of these assets.

Both China and the U.S., in their quest to develop modern conventional warfighting strategies, have focused on concepts that call for the disruption of command and communication networks. While a major conflict is unlikely, it's not clear whether these strategies consider the need for discrimination between communication systems and satellites that are integral for communication with nuclear forces, particularly SSBNs at sea. Any loss of contact between national commands and SSBNs would put significant pressure on the underdeveloped command and control arrangements of China and India's SSBNs.

The introduction of SSBNs in the Indo-Pacific by India and China reflects the multi-polar and complicated reality of nuclear deterrence in the 21st century. SSBNs are not going away. A realistic goal is not to try to reverse the trajectory, but to try and find ways to minimize risk, and ensure these platforms contribute to, rather than destabilize, peace and strategic stability in the region.