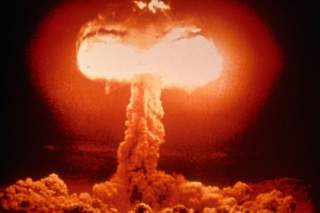 According to a new Gallup poll 18 percent of Americans view Russia as the top threat to the United States. This indicates that Russian President Vladimir Putin’s aggressiveness in Ukraine has begun to scare the American public. While 18 percent may not seem like a significant portion of the population, there are plenty more reasons why citizens should view Moscow as a threat that underscores the need to enhance U.S. missile defenses and modernize the nuclear arsenal.

In 2000, Russia did away with its “no first use” nuclear weapons policy and added the option of “de-escalatory” nuclear strikes, placing these dangerous weapons at the center of its military doctrine. De-escalatory nuclear strikes allow Russia to respond with a limited nuclear strike if confronted with a large-scale conventional attack that exceeds its defense capabilities. For the Russians, this strategy deters the U.S. and its allies from becoming involved in conflicts that Moscow wishes to dominate. For the rest of the world, it increases fear that deterrence will fail – Putin could miscalculate a threat and fire nuclear weapons due to miscommunication.

International agreements do not seem to carry much weight in Moscow. The recent annexation of Ukraine violated the 1994 Budapest Memorandum in which Kiev relinquished nuclear weapons that were acquired when the Soviet Union collapsed in exchange for protection by the signatories, Russia, the U.S., and the U.K. By developing an intermediate-range cruise missile Moscow ignored a second pact, the Intermediate-Range Nuclear Forces Treaty. This agreement was signed in 1987 by the U.S. and Soviet Union and eliminated intermediate-range missiles, between 500 and 5,500 km (300-3,400 miles). General Martin E. Dempsey, chairman of the Joint Chiefs of Staff, considers this a significant military breech and the Pentagon is considering re-deployment of nuclear cruise missiles in Europe among other options as a response.

Russia continues to modernize its nuclear triad of intercontinental ballistic missiles (ICBMs), bombers, and ballistic-missile submarines in spite of economic troubles at home. The Kremlin is updating its bomber fleet to include the capability of a new long-range, nuclear-armed cruise missile as well. A fresh generation of submarines will soon enter service and a new road-mobile ICBM is in development capable of carrying warheads with multiple independently-targetable reentry vehicles – both intended to penetrate enemy missile defenses. Road-mobile ICBMs are unsettling because they can be fired from any location, making it tougher for the U.S. to preempt.

Russian Foreign Minister Sergei Lavrov has stressed Russia has the right to place nuclear weapons in Crimea since it has become a part of a state that possesses such weapons. President Putin also announced in August 2014, “I think no one is thinking of unleashing a large-scale conflict with Russia.  I want to remind you that Russia is one of the leading nuclear powers.” In October 2014, Putin told the world to “remember what discord between large nuclear powers can do to strategic stability.”  Furthermore, General Nikolai Makarov, Russia’s senior military commander in 2012, threatened NATO members who host anti-missile defense systems that “a decision to use destructive force preemptively will be taken if the situation worsens.”

Some opponents claim that nuclear weapons are associated with outdated Cold War thinking and are irrelevant to contemporary politics, but they are mistaken. Nuclear weapons remain crucial to current affairs, particularly when a country that has over 2,000 nuclear weapons  uses them rhetorically to gain advantage. If the U.S. were to eliminate its entire nuclear arsenal, armed states like Russia would utilize nuclear stockpiles as leverage to coerce or attack the U.S. and its allies. The best way to complicate the calculus of Russia (or that of any rogue nation that desires to launch a nuclear attack) is by boosting missile defenses of the U.S. homeland and maintaining an assured second-strike capability.

If deterrence were to fail, the U.S has no protection in place to protect its homeland from a large missile attack. The Ground-based Midcourse Defense (GMD) deployed on the West Coast can protect against a limited number of warheads, but that system should be the first step to developing a more robust missile defense with supplementary interceptors and additional locations to allow more time for identifying, tracking and intercepting incoming threats. Completing the European Phased Adaptive Approach by placing a missile defense interceptor site in Romania this year and placing an Aegis Ashore site in Poland in 2018 without delay would also protect the U.S. and its allies from nuclear launches originating in the region. Washington should continue to explore new technologies to further amplify defenses such as the use of directed energy. Finally, America must remain committed to modernizing its nuclear forces to maintain a deadly second-strike capability that deters Russia and other rogue states from launching an attack. After all, Moscow and other nations continue to strengthen their nuclear force and capabilities, why should the U.S. passively sit back and allow the strategic balance to erode?

Not many options are left for the U.S. and NATO to develop a peaceful relationship with Russia. The West must tread carefully when confronting Moscow on issues such as the Ukrainian conflict lest it lead to the failure of deterrence and the use of nuclear weapons. But playing nicely with Russia has failed. Washington can continue to dream that Moscow will come to its senses and pursue a cooperative relationship, but the U.S. also has the obligation to guard its homeland and allies from nuclear strikes.  Russia and rogue nations will be less likely to launch an attack against America and its allies with durable missile defenses and a powerful U.S. second-strike capability. Now is not the time to envision a world without nuclear weapons – now is the time to boost missile defenses and revamp the strategic nuclear force to protect our nation.

This piece originally appeared on the LexNext blog.