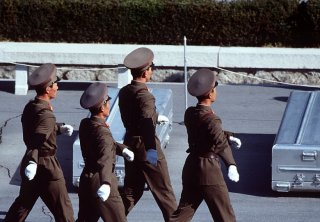 Kim’s back on deck, albeit walking with a cane. His reappearance recently brought to an end a 40-day absence from public view, during which speculation ran rampant about what might have caused it. In response to his reappearance, international media seem to have set aside half-wishful thoughts that he might have been overthrown and returned to a theme of all’s-well-that-ends-well in Pyongyang. But it’s worth unpacking the issue of the missing Kim just a little more. True, no regime change occurred. Still, the absence was so poorly handled by the North there might well be other issues in play here besides Kim Jong-un’s health. Perhaps future absences beckon. In any event, Kim’s health matters—it’s tied up with both his authority in North Korea and the broader issue of the post-Kim North Korea.

During the leader’s absence from public view, North Korean media suggested that Kim was undergoing a course of medical treatment and had been experiencing “discomfort.” Speculation about the source of that discomfort ran thick and fast, including gout, diabetes, strained tendons, and ankle injuries. But given the unusual political circumstances of North Korea—Kim’s a young dictator trying to lock down his succession in a country about whose inner-circle politics we know almost nothing—it’s not entirely surprising that other, more sinister, explanations also received an airing. It’s probably true that if Kim Jong-un’s going to be toppled, that’ll occur while he’s still settling into the job—because if he makes it through the early years he’ll probably be there for decades. So any unexplained absence of the leader is bound to draw attention—hence the occasional bursts of black humor that Kim’s discomfort might have been caused by a “nine-millimeter headache.”

But there was always a large element of wishful thinking in believing that a regime change had unfolded in North Korea without anyone noticing. And throughout Kim’s absence, as Susan Rice, the US National Security Adviser said at the weekend, there was no actual evidence that he’d been deposed: no signs of a power struggle; no tanks in the streets of Pyongyang. Even the short-notice visit of a high-powered delegation to Seoul suggested that someone was in control and making the principal decisions.

But Kim’s absence matters in ways that go beyond the simple possibility of regime change. So far the image Kim Jong-un’s been building is of an energetic, youthful leader—a decisive personality able to wait out his enemies both foreign and domestic. Tennyson said that authority forgets a dying king, so it’s reasonable to conclude that it has at least some short-term memory lapses about a debilitated one. A prolonged absence—or repeated absences—will do more than feed international speculation about whether dark deeds have been perpetrated by Colonel Mustard in the conservatory with a candlestick. It’ll paint inside North Korea the picture of a vulnerable leader. That’d be a problem for Kim—and not especially helpful for the rest of us hoping to see clear North Korean decisions in relation to a resumption of talks about the North’s nuclear program and a “grand bargain” about the program’s dismantlement.

Moreover, we shouldn’t overlook the bigger questions concerning the future of leadership in North Korea. Here, I would recommend readers have a look at Scott Snyder’s excellent post. Kim’s young: he has no heir in the traditional line of succession, and won’t have one for at least a couple of decades. During his absence, media tended to focus a little more upon his sister, Kim Yo Jong. But most of her influence probably derives from her brother. In short, for many years to come Kim’s going to be staring down the barrel of a succession crisis, with no obvious successor.

Kim’s recent absence is a potent reminder of the political difficulties that a dictatorship like North Korea confronts. And yes, we’re talking here about the future leadership of a nuclear-armed country. The issue’s a serious and multi-layered one: thinking about Kim’s absence in the “Where’s Wally?” framework doesn’t quite capture it.