Obama Must Use Europe Trip to Reinforce U.S. Leadership 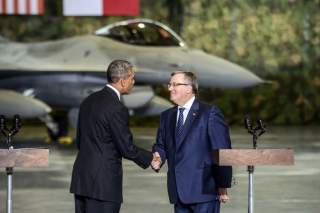 Those European leaders who bestirred themselves to watch President Obama’s commencement address at West Point last week must have had mixed feelings. On the one hand, the speech amounted to a clear rejection of the Bush administration’s global war on terror, a policy that remains controversial in Europe and with inconclusive effects for the American presence around the world. At the same time, it failed to present a new vision of America’s global role in the 21st century to guide the Obama administration’s struggling foreign policy.

In particular, the speech was notably quiet on the need for America to support the Western liberal order and to strengthen the transatlantic partnership – two issues that are intimately connected, helped shape the last decades of world order, and which now both require strong U.S. leadership. The President must therefore use his trip to Europe this week to start designing a grand strategy that includes a vital role for Europe if he wants to keep the international liberal order alive and healthy in the years to come.

With two years left in office, one can perhaps argue it’s too late for the Obama administration to finally begin thinking strategically about U.S. foreign policy. During the past six years, we have witnessed disparate policies, but no coherent doctrine like “containment,” “détente,” “democratic enlargement” or even “the war on terror” in the past. From the onset, Obama seemed to side with Richard Haass’ motto of “foreign policy begins at home” and gave priority to the domestic economy, financial stability and healthcare reform. The closest thing to a grand strategy that the administration was able to put forward was the pivot to Asia. Dubbed the age of America’s Pacific century by Hillary Clinton, this strategy has so far come to naught. And both Middle East and Europe are still calling for U.S. attention.

Meanwhile, military operations in Libya and Mali without American leadership underscored the notion that humanitarian wars are not Obama’s cup of tea. Yemen, Pakistan and Somalia proved that an indiscriminate drone program without international regulations or at least some acceptable rules of engagement have replaced the “Clintonian” use of benevolent American power and George W. Bush’s use of long-lasting American military commitments.

Critics have viewed the Obama Doctrine as retrenchment, worthy perhaps that of an absent global power but not a leader of the international system. For them, recognizing the limits of using American force and its influence to unilaterally shape world politics are synonymous with weakness and a public demonstration of inconsistency that will only encourage uncontrolled competition between global powers’ and open up the door for aggressive revisionism by countries such as China and Russia.

At West Point, Obama attempted to answer his critics: he is comfortable with American exceptionalism, recognizes its indispensable power, and accepts U.S. global leadership. But he lacks an overall approach of how to best make use of America’s still significant influence. In many ways, Obama’s new strategy of indirectly countering terrorism and solving crises through offering support to other countries and working more closely with partners means that the need for strong U.S. allies to share the burden of international security and stability will only grow in coming years due to fiscal constrains and a growing public sentiment against extensive unilateral military operations at home.

This leads us to Europe, the strongest and most reliable U.S. ally since World War II, but completely absent in the West Point address. It is true that Obama did mention that NATO must keep the territorial security of its members as the alliance’s core concern while also helping out fighting terrorists in the MENA region. However, Obama’s attention to transatlantic relations sounded more like a fastidious notion of how allies must behave when they are needed by Washington to confront terrorists or deal with Russia than a true partnership.

Furthermore, at West Point Obama offered no words about the delicacy of the current moment in Europe. The continent is facing a ‘perfect storm’ of a struggling recovery from an economic earthquake in its heartland, a Russia that is challenging the post-1989 order and constituting geopolitical threat in its backyard, and the rise of extremism all over the continent – parties that mix economic protectionism, nationalism, and anti-Semitism. The recent European elections demonstrated how those movements are popular, powerful and can alter the political game across the continent. Europe is clearly currently undergoing its most dramatic identity crisis in many decades.

What is more surprising is that while Obama constantly keeps asking Europe to contribute more to security, he has repeatedly missed the chance to elevate transatlantic relations to an appropriate level of relevance. What is needed from Obama is a strong reaffirmation of America’s enduring support to European security. Such an approach must go beyond the $1 billion the President pledged in Warsaw on Tuesday to enhance U.S. military support to Eastern European allies. To truly reassure allies, and sending a clear signal to Moscow, Washington must be willing to place troops in Eastern Europe on a permanent basis. However, doing so should not be a carte blance for Europeans to refrain from further investments in their own defense.

During the G-7 meeting, Obama must also press European leaders to keep firm pressure on Putin. There is absolutely no reason to remove sanctions yet – Russia is determined to annex Crimea while continuing to destabilize Eastern Ukraine. If anything, further sanctions should therefore be considered.

In addition, Obama must offer a strong reaffirmation of the need to complete the ambitious, but still far-from-guaranteed, Transatlantic Trade and Investment Partnership (TTIP). This agenda would not only help boost EU and U.S. economic competitiveness and a transatlantic energy market to replace Russian dependency, but also reinforce Western liberal norms, influence and transform global trade, recover credibility and power after the financial crisis and send a strong message to Russia that “the West is united and will lead.”

The timing of the President’s trip to Europe could not be more critical. As President Obama will look to America and Europe’s shared history and honor those who gave their lives on the shores of Normandy and struggled for democracy in Poland, he also needs to do more than just look to the great lessons of the past. Europe and America need to shape the future by deepening their ties, common vision and global influence. In other words, denying the deterministic fallacy that says that the West is in decline. What European leaders this week expect to hear from him is a strong reaffirmation of transatlantic ties and American recommitment to the Western liberal order. Since he failed to deliver on this during his West Point speech, Obama does not have the luxury of doing so again during this trip.

Bernardo Pires de Lima is a Non-Resident Fellow at SAIS Center for Transatlantic Relations at the Johns Hopkins University in Washington, DC, and a Researcher at the Portuguese Institute of International Relations in Lisbon.

Erik Brattberg is a Resident Fellow at the Brent Scowcroft Center on International Security at the Atlantic Council in Washington, DC and an associated Researcher at the Swedish Institute of International Affairs in Stockholm.