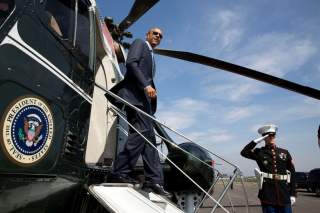 In his recent interview with The Atlantic's Jeffrey Goldberg, President Obama specifies some key elements of his 'theory' on the use of military force — part of the so-called Obama Doctrine. Goldberg claims Obama would argue that “dropping bombs on someone to prove that you're willing to drop bombs on someone is just about the worst reason to use force.” What does this interview tell us about how Obama thinks about the use of military force?

On the one hand, Obama believes that military force should be limited. He says: “I had come into office with the strong belief that the scope of executive power in national-security issues is very broad, but not limitless.” Generally-speaking, limiting military force is a good thing. War is a risky and costly exercise that can only be justified in the most extreme cases because of the likelihood of widespread death and destruction. Combatants in war have frequently inflicted high-levels of devastation: they have laid waste to the environment, destroyed cultural heritage, wounded, maimed, and killed.

Obama is a realist in the sense that he recognizes the limits of U.S. military power. He says: “I suppose you could call me a realist in believing we can't, at any given moment, relieve all the world's misery.” He continues: “We have to choose where we can make a real impact.” It is certainly consistent with political realism for Obama to be concerned with the high costs and risks of war.

But Obama's reticence to use military force also has an important moral element. John Brennan (Obama's CIA Director) suggests that he and the President “have similar views. One of them is that sometimes you have to take a life to save even more lives. We have a similar view of just-war theory.” The Just War tradition acknowledges that sometimes war is necessary, but it seeks to reduce the harm of war both by preventing its incidence and, where it does occur, by minimizing the death and destruction it causes.

According to Brennan, for example, “the president requires near-certainty of no collateral damage. But if he believes it is necessary to act, he doesn't hesitate.” This reflects the Just War principles of discrimination (do not kill non-combatants) and last resort (only use military force after other reasonable alternatives have been tried).

On the other hand, Obama has been a leading advocate of using military force short of war. He says:

“It's probably easier to make an argument that a relatively small force inserted quickly with international support would have resulted in averting genocide [more successfully in Rwanda] than in Syria right now, where the degree to which the various groups are armed and hardened fighters and are supported by a whole host of external actors with a lot of resources requires a much larger commitment of forces.”

Over the last 20 years or so we have witnessed increasing use of militaries for purposes other than fighting conventional wars. This is due in part to the emerging norm in the 1990s favoring military intervention to protect civilians whose lives are seriously threatened; in part to a recognition that the military can perform a variety of political functions in peacetime; and in part a response to the heightened attention to the threat from terrorism. And Obama has been at the forefront of this trend.

These types of military operations encompass a wide-range of tasks including peacekeeping, supporting civil authorities, counter-terrorism, disaster relief, enforcement of sanctions and so on. Many of them do not require militaries to use lethal force. But in some cases, because they are working in an environment of conflict,  militaries are expected (and prepared) to use such force.

But such broadening of the purpose creates a problem. The problem is that militaries are expected to use their unique capabilities to apply deadly force in situations of conflict outside (what we conventionally understand as) war, where the grounds for their destructive actions are not clear. In war, it can be permissible for soldiers to do certain types of harms that we would not allow in any other context, especially when it comes to killing for reasons other than individual self-defense.

For example, soldiers fighting a war can attack and kill enemy combatants without warning (eg. in an ambush or a missile strike). They are also permitted to do serious collateral harm, including the killing and maiming of non-combatants, providing that the military objective is important enough and the non-combatant deaths were not foreseeable and not intended. But in cases where soldiers are not at war (or at least there is some doubt that it is war) then how should we judge the use of military force? Should we extend the boundaries of 'war' to include less conventional conflicts? Is it a matter of developing a more sophisticated set of justifications based on killing in self-defense? Does policing offer a better way of judging uses of force 'short-of-war'? Or is it something else?

If we choose to use military force for a function that is something akin to a policing role, then we can we end up transporting the military mindset about using lethal force along with military personnel, equipment and training. If a state is using its military capabilities to fulfill a policing role, then presumably the rules of lethal force should be unlike the ones we permit in war; they should be much more restrictive. Perhaps they should not be quite as restrictive as those of police working within a well-ordered society, but they should certainly be more restrictive than we are willing to allow in war.

So in situations of conflict short-of-war, where they are expected to use lethal force, militaries should adjust to the fact that they are not fighting a war and be more restrained in their use of lethal force.