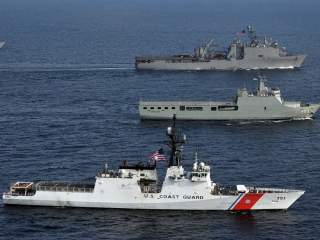 The Obama administration may have been caught on its back foot by China’s rapid island building in the South China Sea over the last few years, but despite its lackluster policy response, its preference for multilateralism over containment may be achieving success. Fortunately for Washington, its allies and partners in the region have come together to confront Beijing’s deeper, more assertive expansion in the South China Sea. Washington’s hub-and-spokes security architecture in Asia now appears to be coalescing at the eleventh hour, as Pacific nations warily await a ruling from the International Tribunal on the Law of the Sea (ITLOS), widely expected to rule against Beijing’s claims.

The region’s emerging security cooperation—primarily partnerships between middle powers such as the Philippines and Vietnam, but increasingly spearheaded by Japan’s reformist Abe administration—has materialized despite the lack of coherent strategy from Washington. To wit, smaller countries are coming together based on common self-interest, in the absence of coordinated U.S. leadership. This new Asian multilateralism may be more durable in the long run because it is not simply part and parcel of the U.S. rebalance, but rather an organic reaction deeply rooted in middle powers’ strategic interests.

What the Critics Have Been Saying

President Obama’s reluctance to pursue more aggressive military deterrence in the South China Sea has drawn numerous criticisms, even within the political establishment. Members of Congress and the military establishment have clamored for a more robust response. Senators Paul Ryan and Marco Rubio have called on the President to approve a more vigorous show of force from the Navy, and Representative Randy Forbes of Virginia organized a letter addressed to Obama and Defense Secretary Ash Carter, which expressed concern “that the continued failure to..[sail]…in close proximity to China’s artificial formations…could be interpreted as de facto acceptance of Beijing’s destabilizing behavior.”

Admiral Harry Harris, commander of U.S. Navy’s Pacific Command, has waged a well-publicized campaign for more active confrontation of China’s island-building in the South China Sea. Sen. John McCain recently stated, “The White House’s aversion to risk has resulted in an indecisive policy that has failed to deter China’s pursuit of maritime hegemony while confusing and alarming our regional allies and partners.”

Academics and analysts have echoed these hawkish sentiments. Daniel Wei Boon Chua, a research fellow at the S. Rajaratnam School of International Studies in Singapore, has argued that the current U.S. policy “forces Southeast Asian claimants to resort to self-help and trigger greater military buildup in the region”. Chua points to Vietnam and the Philippines’ increased defense spending, directed at improving naval capacity, as evidence that Washington has triggered a Southeast Asia arms race with a “go-it-alone” mentality. Furthermore, he writes in The National Interest, the United States’ emphasis on peace at any cost has persuaded “extraregional powers” such as Australia and Japan that they must “step in” to assert their interests in order to secure regional stability.

What Has Been Happening Recently

Despite critics’ insistence that Obama’s strategy of multilateralism rather than containment is undercutting American power in Asia, the reality on the ground is far different. Regional countries are welcoming a strong U.S. presence and have lined up to sign defense deals with Uncle Sam. Asian states have also formed security links and strategic partnerships amongst each other in a growing network to defend against Chinese domination. The countries at the forefront of this defensive bulwark, Japan, the Philippines, and Australia, are U.S. allies that share the United States’ interest in an open international system. Like the United States, they are expressing increasing alarm at China’s willingness to ignore and bully smaller states in the South China Sea in a quest to shore up its expansive territorial claims. And they benefit from the status quo, which protects freedom of navigation and commerce, and guards against the dominance of any one state in the South China Sea.

In June 2015, the U.S. and Vietnam signed a Joint Vision Statement on Defense Relations paving the way for closer military cooperation. There is speculation the U.S. may finally lift its weapons embargo on Vietnam ahead of President Obama’s visit to Vietnam this month. In March, the United States and the Philippines concluded a deal to allow U.S. troops on five Filipino bases, following the January decision by the Philippines’ Supreme Court upholding the legality of the Enhanced Defense Cooperation Agreement (EDCA).

America’s allies and partners in the region are forming stronger defense ties with each other as well. In November the Philippines and Vietnam, two of the most outspoken critics of China’s expansion in the South China Sea, put ink to a strategic partnership. In it, the two sides agreed to strengthen bilateral defense cooperation, particularly in joint activities in agreed-upon areas of the South China Sea, and to “abide by a rules-and norms-based approach in promoting a stable maritime security and maritime safety regime” consistent with international law. Last Friday, Australia and Singapore concluded a Comprehensive Strategic Partnership. And Indonesia, the Philippines, and Malaysia last week agreed to joint patrols in the Sulu Sea, the area between the three nations.

America’s longtime ally Japan has also been working to advance the hub-and-spokes security architecture in Asia which has upheld peace in Asia since the end of World War II. In 2015, Tokyo formed strategic partnerships with Vietnam, the Philippines, Indonesia, and Malaysia. More recently, there has been revived discussion of a potential quadrilateral defense arrangement, a maritime coalition bringing together the United States, Japan, Australia and India. Such a security nexus would span the Indian and Pacific Oceans and protect freedom of navigation in important shipping lanes and smaller countries’ littoral waters.

The United States has also expanded funding for Southeast Asian nations’ maritime domain awareness. In June 2015, the Pentagon announced its Maritime Security Initiative, a five-year $425 million program to improve the capacity of South China Sea states to monitor and defend their waters. $42 million of this year’s $50 million allotted went to the Philippines, the United States’ principal ally in the South China Sea. Officials say the level of aid will ramp up in the next several years.

What We Can Expect In The Future

The Permanent Court of Arbitration’s International Tribunal on the Law of the Sea (ITLOS) is expected to deliver a ruling any week now. Its ruling, expected to favor the Philippines by ruling China’s territorial claims in the South China Sea, will have a profound impact on the claimant states involved, particularly the Philippines, which initiated the case in 2013, and China, which has firmly rejected ITLOS’ authority. The case will also impact on the strength of international law: in theory, all nation-states are subject to the rule of law, but the Permanent Court of Arbitration (PCA) has no means to compel states to comply with its authority.

The South China Sea ruling will be a litmus test to observe Beijing’s willingness to conform to international norms and legal standards. China will be confronted with a choice to either stand by its aggressive claims, ramping up tensions, or compromise and agree to honor the ITLOS arbitration, thereby losing face domestically and some credibility abroad. The critical question is: can Washington and Beijing come to an understanding whereby China agrees to honor international arbitration without losing face?

Peaceful resolution of the disputant’s claims requires finding avenues for face-saving. Traditionally, China has been most likely to cooperate with international powers like the United States when it is given a private off-ramp, rather than named and shamed in the international limelight. For example, in 2001, when a U.S. spy plane and a Chinese fighter jet collided in midair, killing a Chinese pilot, rapidly escalating tensions cooled when President Bush publicly expressed regrets for the pilot’s death, leading to the release of twenty-four detained U.S. air crew and allowing China to save face without appearing to concede to American pressure. Washington policy wonks should explore similar face-saving diplomacy to encourage Chinese decision makers to honor the PCA’s ruling.

Barring Beijing’s acquiescence to international arbitration, Washington still operates from a position of strength and can employ its hub-and-spokes alliances and partnerships to put pressure on China to seek peaceful solutions. The United States retains the option to balance and contain Chinese aggression with the majority of South China Sea states that support the U.S.-led security order in Asia.

The stakes are high, but the chances of navigating a peaceful path are higher if the United States can convince Southeast Asian nations to speak in unison and uphold the ITLOS ruling, whatever the court’s decision. China has already split off Brunei, Cambodia, and Laos, plying their autocratic rulers with lucrative aid and development packages, but Washington maintains a wide array of alliances and partnerships that leave China standing alone as it snubs international law.