Obama's Strategy in Iraq: Operation No Boots on the Ground 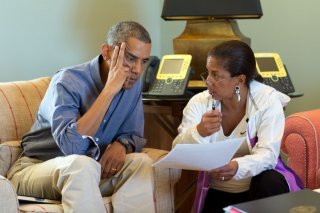 Listening to President Barack Obama speak about Iraq over the past several days, you can’t help but feel sorry for the guy.  This is, after all, a man who catapulted to the top of the list of Democratic presidential candidates in 2008 by largely being the anti-Iraq, anti-war candidate.  The invasion and occupation of Iraq, Obama memorably put it, was “a dumb war,” a war of choice, and perhaps one of the most disastrous foreign policy decisions a U.S. president has made since Vietnam.  This message, and a fresh face running a campaign of hope, was enough for the freshman Illinois senator to not only best the heavyweight Hillary Clinton in the primaries, but also defeat Senator John McCain in the general election.

For an administration that has consistently touted the full withdrawal of U.S. combat troops from Iraq as its greatest foreign policy achievement (the White House could use one right about now), it’s a bitter pill for the president and his national security team to have to re-engage militarily in a country that most Americans would rather forget about.

Fortunately, Americans don’t have to worry about seeing their sons and daughters, mothers, and fathers back on Iraqi soil defending an increasingly polarizing, ineffective, and abysmal Iraqi government in Baghdad.  In fact, Obama’s use of military force in northern Iraq to date has been anything but large-scale or dramatic; four days after the president gave the order, the Pentagon has executed several rounds of airstrikes on a select group of fixed ISIL targets.  CNN and Fox News may like to hype this up with the continuous, red and white flashing “breaking news” icons, but in the full spectrum of military operations, these operations are in the category of “pinprick.”

Yet “pinprick” is exactly what President Obama and his administration want.  Indeed, this is precisely the plan: do just enough to avert the genocidal slaughter of tens of thousands of trapped Yazidis by a bunch of committed jihadist lunatics, but not enough that would compel the United States to increase its involvement in an unwinnable situation.  If there is any U.S. president who is cognizant of and fully guarding against the “mission creep” syndrome, it’s President Obama.  He has made this point continuously in his public remarks since Thursday night, when he first stepped up to the podium and addressed the American people on the nightmare unfolding in Iraq.  And he repeated it once more: “As Commander-in-Chief, I will not allow the United States to be dragged into fighting another war in Iraq.”

The president’s critics on the Republican side of the isle will continue to bash the administration for playing it safe on Iraq: that is, sending a few manned and unmanned aircraft to drop 500-pound bombs on obvious ISIL targets, and hoping that this will deter or somehow keep the organization in check.  The National Review, a conservative website and magazine, applauded Obama for finally taking concrete military action, against ISI, but in the same sentence described his actions to date as too cautious.  “The organization President Obama quite recently derided as al-Qaeda’s JV team has had a championship year, which demands much more than one fusillade of airstrikes,” the magazine opined.  “The Islamic State has surprised with its effectiveness, and it’s become clear that the Kurdish peshmerga paramilitary forces are underequipped to fight it.”

In an interview with The Daily Beast, Senator McCain labeled the administration’s use of military force in Iraq as “the weakest possible response;” a strange description given the fact that the White House could have decided to stay on the sidelines altogether and let ISIL move closer to the Kurdish capital, Irbil.

Advocates for a more forceful response in Iraq do have a point, however, when they argue that the administration needs to better explain to the American people what its plans are for a more comprehensive counterterrorism strategy against the ISIL problem​.  This extremist army is not confined strictly to the Sinjar mountains, Mosul, Tel Afar, or Tikrit; rather, its control of territory is unprecedented in the contemporary history of international terrorism, and the group’s leadership is intent on expanding into new areas unless someone or something stops them.  Thus, simply striking ISIL positions in a geographically confined area in northwest Iraq is not going to solve the issue, nor will it do anything to slow the group’s consolidation of control in eastern, northeastern and northern Syria, or western and northern Iraq.

What is the president prepared to do once the peshmerga—with the help of U.S. airpower—eventually liberates Sinjar from ISIL?