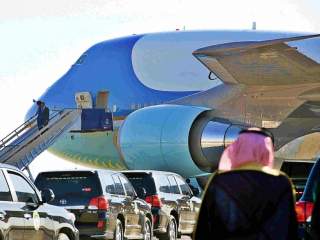 President Barack Obama’s Thursday visit to Riyadh to participate in the Gulf Cooperation Council summit comes one year after his meeting with GCC leaders in Camp David, and is an attempt to shore up an important relationship at a time when the two sides have been drifting apart over key regional issues.

The United States and the GCC have had their disagreements over the nuclear deal with Iran, the handling of the crisis in Syria, policy in Iraq, Egypt and Yemen, and the so-called pivot to Asia. Nevertheless, they still share deep common interests, including maintaining Gulf stability, the free flow of energy to world markets, curbing Iranian interventionism, defeating ISIS and al-Qaeda, ending civil wars and rebuilding regional stability.

At the summit, the two sides will discuss ways to strengthen GCC security through reinforced military cooperation and closer ties with NATO. The GCC will press Obama for clearer assurances on containing and pushing back on Iranian regional interventionism, while Obama will urge his GCC partners for more commitments in the war against ISIS and Al Qaeda in Libya, Syria and Yemen. The two sides will also engage in relation to the ongoing negotiations to end the conflicts in those three countries.

It is important for this summit to reinforce this relationship and build on these numerous common interests, while addressing areas of disagreement frankly and constructively. But the summit should also be an occasion to think big about ways to transform the current conflict system in which Iran and many Arab states are destructively entwined into a more stable and cooperative regional order.

The U.S.-Saudi relationship is the oldest American partnership in the region, dating back to the 1930s. It has had its ups and downs, and today’s relative low is not unprecedented. The relationship was built on oil, but with the United States moving toward energy independence, that pillar is weakening. Historically, the two countries were also allies in countering the Soviet Union during the Cold War and then in containing Iran after the Islamic revolution there in 1979.

The main falling out has been over Iran. Although the Bush administration’s invasion of Iraq may have been designed to weaken Iran, it ended up empowering it. And the Obama administration’s general disengagement from the region has allowed Iran to exploit this empowerment further.

Gulf leaders have heard mixed messages from America on Iran. Secretary of State John Kerry in Bahrain two weeks ago said that the U.S. and Gulf allies have a shared concern about "Iran's destabilizing actions in the region," and that the United States “will continue to push back" against such provocations.  Meanwhile, President Obama in his Atlantic interview indicated that he did not see the United States in this role and urged “our friends as well as . . . the Iranians . . . to find an effective way to share the neighborhood.” What the region does not need is a new Sykes-Picot agreement to ‘share’ the region between warring regional powers, but rather an agreement among regional powers, including Iran, to—in the words of Saudi foreign minister Adel Jubeir—“abide by the good neighborhood principle and to refrain from interfering into the affairs” of neighboring states.

This might be what Secretary Kerry is working toward. In separate statements in Bahrain he said that if Iran was willing to help end the conflicts in Syria and Yemen and to “cease these kinds of activities that raise questions about credibility . . . and intention” the US “would welcome Iran to be part of a genuine security arrangement for the region.”

President Obama will find that Gulf leaders would welcome such a change in Iranian policy, but what they see are two policies from Iran. One led by president Rouhani and foreign minister Zarif that talks of “regional dialogue . . . noninterference in internal affairs and peaceful settlement of disputes” and one led by Qassem Soleimani and the IRGC that arms and trains the Houthis, backs Assad against much of his own population, and has created Hezbollah, the largest nonstate army in the world, which now controls much of Lebanon and Syria.

Saudi Arabia has also intervened in Yemen and backs the armed Syrian opposition in Syria. But Gulf leaders will argue that they intervened in both places only after Iran’s allies had acted egregiously first.

It is not inconceivable that Iran and the Gulf countries could one day find a way to pull back from the current proxy wars and move gradually toward establishing normal and cooperative relations; after all, fifty years ago Saudi Arabia and Egypt were engaged in a similar high-stakes proxy war in Yemen and much of the Middle East and yet found a way forward.

International sanctions and the P5+1 talks got Iran to accept international norms and limits on its nuclear program; but so far, that diplomatic achievement has only emboldened Iran’s hardliners when it comes to regional policy. Gulf leaders will be interested to hear from their American counterparts what combination of policies can be put in place to get Iran to accept international norms and limits in its regional policies. It will have to be a combination of heavy push back and creative diplomacy.

Kerry hinted at such a combination. President Obama showed effectiveness in leading a policy of sanctions and creative diplomacy that got Iran to the table over the nuclear deal. Does he still have the time and drive to help get the region to a more stable order? Or will he leave that task to the next president?

The U.S.-GCC summit should be about more than just shoring up a shaky relationship and looking narrowly at ways to provide more security amidst a calamitous breakdown of regional order. The United States was part of the process that led to the current disorder, and it needs to be part of the solution. The GCC can also play a leading role, not only in security, but also in bold diplomacy. This partnership was put to valuable use before; it needs to do so again.

Paul Salem is the Vice President for Policy and Research at the Middle East Institute in Washington DC.  He writes regularly on Middle East politics and US policy toward the region. He tweets at @paul_salem.