Obama's West Point Speech: Words That Could Be Tested 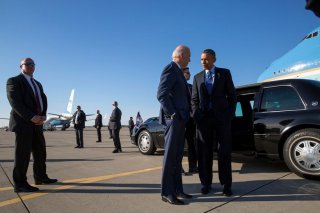 Last week, President Obama spoke to the graduating cadets at West Point. It was an important address designed to articulate a view of the world and America’s place in it—from a security/strategic perspective.

Like any such speech, this one was set in the context of recent history. America emerged from World War II as the great winner—economically, diplomatically and militarily. But it faced an existential challenge in a Soviet empire bent on global dominion. Ultimately, the United States and its allies prevailed, and the Soviet Union was extinguished—without a war. There was nothing accidental or automatic in this outcome; it was one of the truly seminal achievements in human history. The factors that went into it are obviously multiple, but two are especially worth noting. First, the building and maintaining of armed forces sufficient to deter general war and effectively prosecute more limited conflicts. An obvious and necessary corollary included the willingness of a sufficient number of Americans to serve in the military, to fight and, if necessary, die. We have just completed the annual Memorial Day commemoration for those who did just that. Those same armed forces also served to underpin stability in a number of regions as a kind of neighborhood gendarme. Second, the building and underwriting of international institutions like the United Nations and the International Monetary Fund that broadly reflected American values and preferences. But the real key to success of this network of postwar institutions came from the fact that other countries saw in them entities compatible with their own interests. America built an international order with voluntary buy-in from countries old and new around the world. It was a remarkable thing.

Against this backdrop, the terrorist attacks of 9/11 represented a historical turning point and a new kind of strategic challenge to the world’s sole superpower. The G.W. Bush administration responded with the twin invasions of Afghanistan and Iraq. By the time Barack Obama was elected, these wars had already gone on for over seven years—and despite massive effort, the picture was mixed at best and the ultimate outcomes entirely uncertain. And there was the ongoing Great Recession at home and in Europe. It was a situation that demanded a thoughtful, strategic response—with little room for error or illusion. That strategy has evolved and clarified over the last five-plus years. At West Point, the president provided, in effect, a progress report and an update, including the most recent crises in Ukraine, the Middle East and East Asia.

Key elements of the strategy are familiar at this point.

- Terminate the U.S. military presence in Iraq and hope for the best—but there will be no return of American soldiers to that country.

- After a brief “surge” of U.S. forces into Afghanistan, wind down the U.S. military presence on a firm timetable—leaving the future of that country largely in the hands of U.S.-trained Afghan military and civilian personnel. Again, hope for the best while leaving a small residual force for training and counterterrorism.

But the bulk of the West Point speech was devoted to the future—and particularly to where military power fits into American strategy going forward. Key points:

- America’s international leadership—its status as the “indispensable nation”—is a given.

- It serves no purpose to talk of a binary choice between muscular intervention abroad and neoisolationism. U.S. military power will be used when American “core interests” (including the security interests of allies) are threatened—and it will be used unilaterally if necessary. But it will not be used cavalierly: “Just because we have the best hammer does not mean that every problem is a nail.”

- Alternatively, when events outrage our conscience or threaten global order, the response should be in concert with other nations and preferably diplomatic.

The president noted that he last spoke at West Point to announce the surge into Afghanistan. Four cadets in the audience at that time gave their lives in the resulting campaign. “I believe America’s security demanded those deployments. But I am haunted by those deaths . . . . I would betray my duty to you, and to the country we love, if I sent you into harm’s way simply because I saw a problem somewhere in the world that needed fixing, or because I was worried about critics who think military intervention is the only way for America to avoid looking weak.”

The primary purpose of the speech was to articulate careful, workable criteria for the discriminating use of American power. As such, it was impressive. But was it more than intellect and rhetoric? When core interests are threatened is the president prepared to respond? Two tests already loom. This week the president will be in Europe, beginning with Poland, where he will meet European leaders anxious for reassurance—and evidence—that Washington is prepared to counter Russian designs on eastern Ukraine. Meanwhile, China’s piecemeal aggression in the South China Sea continues unabated. Southeast Asian leaders look for evidence that America is ready to draw a line—and enforce it militarily if necessary. Finally, can America lead in the creation of a new set of international institutions and processes—with global buy-in—to confront the next true existential challenge—climate change?