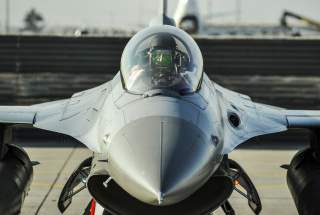 The Defense Security Cooperation Agency has notified the U.S. Congress of the potential sale of a package of upgrades for Oman’s fleet of the Lockheed Martin F-16 Fighting Falcons. The potential sales, which would be worth roughly $63 million dollars, would modernize 23 of the sultanate’s fighter aircraft.

The F-16C/D Block 50, which were first purchased in 2010, forms the core of the Royal Omani Air Force. Like many of the Arab air forces in the region, the sultanate operated relatively well-equipped forces. However, Oman’s military forces pale in comparison to the lavishly equipped Saudi and United Arab Emirates forces, who often purchase top-of-the-line U.S. and European hardware that is not in service with their home countries.

Not to be completely outdone, Omani forces are set to receive a dozen top-of-the-line Eurofighter Typhoon fighters and eight BAE Hawk advanced jet trainers. The first of the new Typhoons were delivered in June 2017. It is not clear when deliveries will be completed.

Oman—which is situated in a difficult neighborhood next door to Yemen and Saudi Arabia—faces an increasingly difficult security situation. Indeed, the sultanate—though generally non-interventionist and its ties to Iran—has joined a Saudi-led coalition against Houthi rebel groups in neighboring Yemen. In the years to come, Oman’s situation is likely only to grown more complex, which might further drive up the sultanate’s defense spending. However, it is not clear how large a defense budget Oman can afford—while oil prices have rise in the past six months to $67 per barrel, those prices are a far cry from the heydays of 2014 when energy prices were more than double that.