One of Russia's Neighbors Is Arming Up with American Missiles 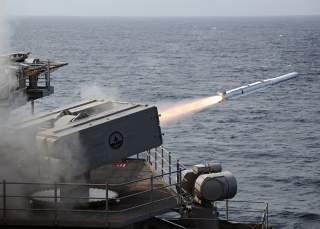 Finland’s tiny navy will face a crisis in the mid-2020s as half its surface combat fleet — four of eight missile boats in total — retires. To prevent this crisis, the navy is upgrading is planning to build four corvettes which are larger than anything currently in the fleet, and arm them with American anti-air and anti-ship missiles.

In February 2018, the U.S. State Department approved a $112 million sale for 68 RIM-162 Evolved SeaSparrow missiles, or ESSMs, for the future corvette, part of the Squadron 2020 project. The Finnish military has U.S.-made fighter jets, shoulder-launched anti-aircraft missiles and rocket launchers, but has tended to buy European weapons.

An officially neutral country, it’s noteworthy Finland is seeking American missiles for its navy during a period of heightened tension with Russia, as that carries with it political implications.

The Finnish navy is small — some 3,500 sailors, 1,900 of whom are conscripts — but has little area to cover. Its focus is on coastal defense and the protection of merchant shipping, which is vitally important to the Finnish economy and society.

Finland’s historic and most likely future threat, Russia, looms so large that Finnish strategy is two-pronged — i.e. avoid giving Russia the perception that Finnish territory will be used against it, while secondly, having enough military power to raise the cost of an invasion from Russia or anywhere else. Hence, Finland practices conscription, and is not part of NATO.

Likewise, the Finnish navy has few ships, but it has enough to at least complicate an invader’s plans. The core of the surface fleet is built around eight missile boats — four 250-ton Rauma class and four newer 240-ton Hamina-class boats — and five minelayers.

Another 10 minesweepers, and a few dozen landing craft and logistical support ships round out the force.

These minelayers and their munitions would be a threat to vessels operating in the narrow Gulf of Finland, and the many fjords — or vuonot in Finnish — along the Finnish coast provide many places for small surface craft to hide. Shallow waters help keep out submarines, of which the Finnish navy possess none.

The Raumas, though, getting old, and are effectively out of commission already due to hull fatigue. In the early 2020s, they will retire. In their place will come the four Squadron 2020 multi-role corvettes. These will be much larger — at more than 100 meters long and with a 3,000-ton displacement — and more capable, serving for more than three decades once their planned introduction in the mid-late 2020s.

The RIM-162 ESSM will also give the corvettes a modern anti-air and anti-missile weapon with greater range, speed and capabilities than the Hamina‘s current South African Umkhonto-IR anti-air missile, which uses an infrared rather than a semi-active radar homing seeker. Radar-guided missiles such as the ESSM are more powerful, and offer superior range, accuracy and reliability when facing enemy countermeasures.

With 17 MK25 canisters on order and 68 missiles, it makes one wonder whether Finland aims to fit four canisters on each corvette, for a total of 16 ESSM missiles per vessel — an impressive amount for a warship in that class. The Finnish navy also wants its future corvettes to have mine-laying capabilities, torpedoes and surface-to-surface missiles.

The minelaying capability aboard the future corvette is important, as two Hameenamaa-class minelayers will retire early next decade.

All together, it’s nowhere near enough to stop the full weight of the Russian military, but it’s enough to make an invasion hurt — which is precisely the point of deterrence. A missile boat hiding in a vuono and armed with Harpoon missiles can present a nasty surprise to a Russian destroyer.

And it’s important to remember that Finland doesn’t imagine going to conflict alone, but being thrust into a conflict against its will due to a larger geopolitical eruption. This means that war with Finland would likely involve a Russian Baltic Fleet — already not in great shape — facing many enemies at once.

Finnish corvettes with modern missiles, even if there are only four of them, makes the Russian fleet’s job a bit harder.