One Thing North Korea Has That the South Doesn't: Google Maps 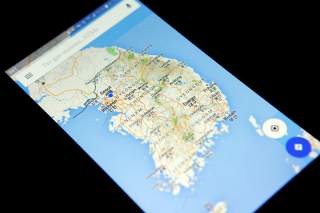 Google Maps has charted new worlds for travelers: unknown terrain becomes easily navigable in an instant, making it possible to drive from Luxembourg to Latvia without having any familiarity with the route. It has become the go-to app for getting all sorts of directions – unless you are in South Korea.

The host country of the Winter Olympics does not allow Google Maps to provide driving and walking directions. In fact, it is the only country in the world where this is the case.

Google Maps is hardly better than a paper map if you are in this part of the world. Apart from public transit directions, it offers some road names, dots where some buildings are or once were, and little more. This is surprising given that South Korea is one of the most developed countries in Asia, with widespread internet infrastructure – it even has the fastest average internet connection in the world. It therefore comes as a surprise to many that Google Maps simply does not work here.

The 83,000 visitors anticipated by the PyeongChang Olympic Organizing Committee to have been in-bound to South Korea in February are likely to have found this a challenge. If they were accustomed to using Google Maps elsewhere, tough: they would have had to find new navigation tools.

Even North Korea, a country shrouded in secrecy, has map coverage “with good data quality and availability.” But in fact, South Korea’s northern neighbor is one reason why Google Maps is not allowed to operate in the country.

Following the Korean War, the Spatial Data Industry Promotion Act and the Promotion of Military Bases and Installations Act were put in place to bar the export of map data outside the country. This is presumably to prevent sensitive information from falling into the wrong hands, especially given the hostility from north of the DMZ. Inevitably, however, the national security measure also has the effect of limiting foreign companies’ presence in online mapping and navigation.

Google stores its maps on foreign servers and therefore has not been allowed access to South Korea’s map data. In 2016, South Korean officials offered to hand their country’s map data over to Google under the condition that the tech company reduce map resolutions for important landmarks like military outposts and government offices. Google turned down the offer. So, streets and buildings remain low-resolution online and on the app.

These restrictions apply to Apple Maps as well. Its mapping services are even more rudimentary.

Although Google Maps can’t easily be used for navigation, there are other options for travelers. Locals have turned to South Korean services such as Naver and Kakao to get directions. These services have traditionally been only available in Korean and searches have to be inputted in hangeul (the Korean alphabet), which presents an obvious challenge to tourists. Although both companies released English versions of their app ahead of the Olympics to accommodate foreign users, desktop versions are still unavailable.

For someone trying to figure out how to get to the stadium from the airport, Google won’t automatically show long it will take, either.

In light of the Olympics, GoPyeongChang app was released in partnership with Naver and the PyeongChang Olympics Organizing Committee to provide transportation support around South Korea and between each of the Olympic venues.

Naver and Kakao have been successful in pushing Google and Apple out of the mapping industry in South Korea because they use government map data that is stored domestically and obscures sensitive locations.

But national security aside, there may be an issue of protectionism. The South Korean mapping services may have been able to maintain their dominance and leave Apple and Google out of the trade partly due to the fact that local lobbying is strong in South Korea.

This is a country where large, family-controlled conglomerates enjoy close ties with the government. Samsung, for example, has dominated South Korea’s market for decades not only in the smartphone industry but for everything from medical centres to apartments and funeral parlors. When Apple grabbed a hefty 33% share of the South Korean smartphone market, the Korean Fair Trade Commission analyzed whether foreign firms were hurting the market. This prompted Roger Kay, president of the tech analysis firm Endpoint Technologies Associates, to accuse South Korea of having a “protectionist agenda” in an article for Forbes.

Naver has also been openly critical of Google for its business practices in South Korea. Korea Herald reports that Naver has stepped up attacks on Google for raking in immense profits. According to the paper, Naver’s founder and former Chairman Lee Hae-jin pleaded with lawmakers to level the playing field with Google.

Such attacks by South Korean companies on their foreign rivals are part of the reason why Apple and Google have not been able to infiltrate the country’s mapping industry. For now, foreign tourists in South Korea will just have to rely on local apps – or good old-fashioned printed maps.