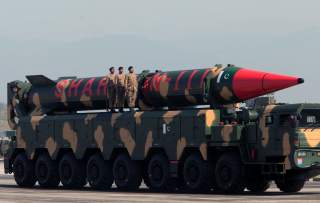 Pakistan has tested a ballistic missile with a multiple independently targetable reentry vehicle (MIRV), the United States confirmed this week.

The Pakistani military first announced its test of the MIRVed missile on January 24, 2017. “Pakistan has conducted its first successful flight test of Surface to Surface Ballistic Missile Ababeel, which has a maximum range of 2,200 kilometers,” the military announced in a press release at the time. “The missile is capable of delivering multiple warheads, using Multiple Independent Re-entry Vehicle (MIRV) technology.” The statement added that the test was aimed at “validating various design and technical parameters.” No other tests of the Ababeel missiles are known to have taken place since the first one.

Despite these claims, many outside experts questioned whether Pakistan really had developed or tested a MIRV. As the Center for Strategic and International Studies’ Missile Defense Project noted, “Some experts have expressed skepticism as to whether Pakistan has indeed surmounted the various technological hurdles required for MIRVed missiles. MIRV warheads are typically much smaller than unitary warheads, and thus require greater miniaturization. It is unclear if the country has manufactured a miniaturized nuclear warhead small enough to use in a MIRV.” Ashley’s confirmation should put this skepticism to rest.

Development of the Ababeel missile is believed to have begun in the mid-to-late 2000s, and the missile’s design is similar to other Pakistani solid-fuel medium-range ballistic missiles, such as the Shaheen II and Shaheen III, according to CSIS’s Missile Defense Project. Unlike those missiles— which both have two stages— the Ababeel is a three stage missile. The BBC reported back in 2010 that Pakistani missile designers were receiving substantial assistance from China in developing MIRV technology. The Ababeel appears to have a large nose cone, which may allow it to carry multiple warheads even if they are slightly larger than normal MIRVed warheads.

MIRVs are undoubtedly useful for defeating missile defenses, as they present numerous targets in close range that interceptors must locate and destroy. At the same time, MIRVs are extremely valuable for counterforce attacks—that is, trying to destroy an adversary’s nuclear arsenal in a surprise first strike. In that sense, they are extremely destabilizing for strategic stability; during the Cold War MIRVs greatly exacerbated the nuclear arms race between the two superpowers.

In an essay on MIRVs during the Cold War, Brendan Rittenhouse Green and Austin Long noted that the Cold War strategic arms race seemed to be stabilizing by the mid-1960s. “But the objective of strategic stability proved illusory,” they write. “The advent of multiple independently targetable re-entry vehicles (MIRVs), more powerful warhead yields, and improved missile accuracy enabled both superpowers to target hardened military facilities.” This forced them to build more weapons to ensure the survivability of their arsenals. Both sides quickly came to regret not banning MIRVs before their introduction. And, shortly after the Cold War ended, they agreed to ban all land-based MIRVs in the Strategic Arms Reduction Treaty (START II). That treaty was signed but never went into effect.

MIRVs could be especially destabilizing for countries like China, India and Pakistan. Unlike the Cold War superpowers, Beijing, Delhi and Islamabad have maintained relatively small nuclear arsenals that are believed to number in the low hundreds, compared to the tens of thousands the Soviet Union and the United States had during the Cold War. That means their arsenals will be especially vulnerable to powerful counterforce capabilities, like MIRVs. That is why I once called the emergence of Asian MIRVs the most dangerous nuclear threat no one was talking about.

Pakistan is not the first country in Asia to test a MIRVed missile. That distinction belongs to China. It is unclear when China initially tested a MIRVed missile, but the Pentagon first acknowledged that Beijing had that capability in its 2015 report on Chinese military power. France, Britain, Russia and the United States also have MIRVed missiles. During his time in office, President Barack Obama removed all MIRVs on America’s land-based ballistic missiles, but Washington continues to have MIRVed submarine-launched ballistic missiles.

Now that Pakistan and China have them, it seems inevitable that India will join the MIRV club sooner rather than later.