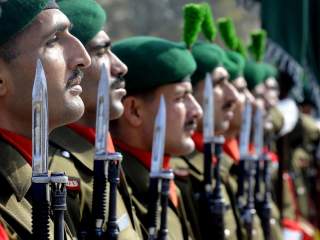 The Middle East is undergoing drastic geopolitical change, and the impact is not restricted to within its geographical boundaries. The Afghanistan-Pakistan and South Asia regions are the first to feel the pressure from the events in the Middle East. This forces countries like Pakistan, which has been criticized for playing a dubious role in the War on Terror, to revisit some of its long and tightly held policies.

First, the U.S. opening up to Iran has put the Middle East in a state of diplomatic and geopolitical chaos, with Saudi Arabia, Iran and Israel coming to odds. The tensions are apparent in the proxy wars that are being fought in the region, with Saudi Arabia battling the Iranian-backed Houthis in Yemen and Iran fighting Saudi-blessed proxies in Syria.

However, nowhere is the Arab-Persian divide (often religiously connoted as the Sunni–Shia divide) more apparent than in Pakistan where both Saudi Arabia and Iran have continued to wage a proxy war by investing in religious seminaries and militant outfits, fanning intense sectarianism in the country. In the wake of recent political changes in the Middle East, both Saudi and Iranian diplomats have rushed to Pakistan to guarantee its support.

However, devastated from sectarian strife in the country, for the first time Pakistan has demonstrated neutrality in the Middle East, a position that has been heavily criticized and viewed with disappointment by the Arabs. For Pakistan, even slight involvement in Middle East affairs means putting hard earned stability into jeopardy. This is something Pakistan can ill afford with a counterinsurgency underway and challenging economic conditions that have stalled GDP growth at 3 percent.

Also, with the shift in U.S. foreign policy towards Iran, Pakistan has more reason to remain neutral and potentially benefit from the lifting of sanctions. The Iran-Pakistan gas pipeline that was previously blocked by the United States is already underway, with the hope that it will help stabilize the energy-starved Pakistani economy.

The second driver that is forcing Pakistan to reconsider its policies is the looming threat of ISIS. The militant movement has declared its intentions to penetrate Pakistan; a country targeted by militant Islamist organizations due to its nuclear capacity and a sizeable population with an appetite for establishing a global Khilafat.

The Pakistan security establishment has been quick to recognize the threat given that recent suicide attacks in the country have been inked to ISIS. As a result, Pakistan's security establishment has revisited its long held strategy of turning a blind eye to anti–American and anti–Indian militants operating within its borders. This policy has destabilized both Afghanistan and India. Now evidence of the shift can be seen in various ways including: the recent push to bring the Taliban to the table for peace-talks; rooting out elements targeting American and Afghan forces in Afghanistan; and, more importantly, the recent sharing of intelligence with India on the Pathankot attack. The new mindset of Pakistan's security establishment recognizes the potential danger should ISIS spread in Pakistan's lawless regions, cities and towns.

However, many political pundits in Pakistan believe the shift is the result of direct pressure from China, which has invested more than $50 billion in Pakistan through the development of the China-Pakistan Economic Corridor (CPEC). This speculation holds that it is Chinese pressure and direction that has prompted Pakistan to take action for the first time against extremist organizations operating within its borders under the National Action Plan, and maintain neutrality in the Middle East. Chinese pressure or not, the ideological and policy changes in Pakistan are real and may result in sustainable peace in the region.

The government in Islamabad recognizes the CPEC as the only opportunity left for Pakistan to develop itself economically and, importantly, bring stability and progress in the country. The significance of CPEC is such that it is being hailed as a “fate changer” by the government. With Chinese investment pouring in, Pakistan is desperately looking to guarantee stability and safety to ensure the timely completion of the project.

In the words of the Federal Minister Ahsan Iqbal who is managing the CPEC project: “If Pakistan does not provide stability for CPEC, Chinese will not hesitate it to find another route, practically leaving Pakistan out of this mega economic and trade route.”

Given the challenging economic conditions Pakistan faces, the changing geopolitical dynamics in the Middle East, the threat of ISIS in the region and the influx of Chinese investment, Pakistan has drastically shifted its focus. This has allowed it to work and cooperate closely with the United States, reduce tensions with India, push for peace in Afghanistan and importantly, cut down on the extremist elements in the country under the National Action Plan through which major extremist Islamic seminaries and hate mongers have been arrested and prosecuted.

However, while Pakistan now appears set on a course of stability through major changes in policy, it will take some time before the impact is felt and sustainability is known.

Hussain Nadim is pursuing a PhD at the University of Sydney. He is also Project Director for the Peace and Development Unit at the Ministry of Planning, Development & Reforms, Government of Pakistan, where he initially served as Special Assistant to Federal Minister. This article first appeared in the Interpreter.