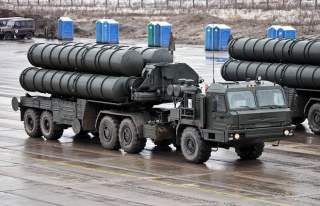 Russia will deploy the powerful S-400 Triumf surface-to-air missile defense system to its base in Latakia, Syria, as part of its response to Turkey shooting down one its Sukhoi Su-24 Fencer bombers.

Meanwhile, Russia is also moving the missile cruiser Moskva, which is armed with a naval version of the much-feared S-300 missile system called the Fort (Rif-M)­—to the Syrian coast near the Turkish border. Additionally, the Russian defense ministry has stated that, henceforth, all Russian strike aircraft will be escorted by fighters—which likely means additional Sukhoi Su-30SM Flankers could be deployed to the region.

“The S-400 air defense missile system will be brought to the Hmeimim base at the decision of the commander-in-chief,” Russian defense minister Sergey Shoigu said on Wednesday according to TASS.

Earlier on Tuesday, Lt. Gen. Sergei Rudskoy, chief of the main operational directorate of the general staff of the Russian armed forces, said that all military contacts with Turkey would be suspended. He also announced additional Russian security measures.

“First: All the activities of the attack aviation will be carried out only under cover of fighter aircraft,” Rudskoy said. “Second: Air defense will be reinforced. For that purpose, the Moskva cruiser equipped with air defense system Fort analogous to the S-300 one will go to the shore zone of Latakia. Russian Defense Ministry warns that all the potentially dangerous targets will be destroyed.”

The addition of the S-400 is significant and will complicate both American and Turkish air operations. Once the powerful air and missile defense system is deployed, only the American F-22, F-35 and B-2 stealth aircraft can operate safely inside a zone protected by the weapon for any length of time.

According to manufacturer Almaz-Antey, the S-400 “baseline” system can engage targets at ranges of more than 155 miles at altitudes up to 90,000ft. Also of note,  the S-400 can support at least three types of missiles with differing capabilities. According to Western sources, some versions of those missiles are capable of engaging targets as far way as 250 miles. The S-400 can track 300 targets simultaneously and engage thirty-six of those at any one time. Russia’s deployment of the weapon in Latakia means that it could attack aircraft flying deep inside Turkish airspace from within Syria.

The S-300 system onboard Moskva is also an extremely capable system that is similar to the S-400, but not quite as potent. One of the missile types supported by the Rif-M system—which is also deployed onboard Moscow’s Kirov-class nuclear-powered battlecruisers—can engage targets out to 95 miles at altitudes up to 90,000ft. The system can engage half-a-dozen targets with up to twelve missiles simultaneously. Moskva can carry up to sixty-four missiles for its Rif-M weapon system.

Meanwhile, more information is becoming available about the downing of the Russian Su-24M Fencer. According to the Turkish side, the aircraft violated the country’s airspace for about seventeen seconds. The Russians have, meanwhile, released a map that shows that the Su-24 did not cross the border. Moreover, the surviving Russian pilot—Capt. Konstantin Murakhtin—told Russian TV that his jet did not cross the border and received no warnings. Meanwhile, U.S. officials told Reuters that they believe that the Turkish shot the Russian Su-24 down inside Syria after it briefly crossed the border.

Even if one accepts the Turkish side of the story at face value, at least some of Ankara’s NATO allies say that there were less inflammatory ways to deal with the situation. “There are other ways of dealing with these kinds of incidents,” one NATO diplomat told the Reuters . Turkey, meanwhile, is doubling down on its rhetoric. “No one should expect us to remain silent when our border security and our sovereignty are being violated,” Turkish president Recep Tayyip Erdogan said in a televised speech.

Meanwhile, despite the tough talk, the Russian and Turkish sides appear to be attempting to de-escalate the situation—though another incident would likely scupper that. Earlier today, Turkish foreign minister Mevlut Cavusoglu spoke via phone with his Russian counterpart Sergei Lavrov.

While the Turkish foreign ministry stated that the two would meet in Belgrade, Russia's Interfax news agency said Lavrov had not agreed to meet according to Reuters. The Russian believe that the downing of the Su-24 was premeditated attack and are reconsidering the relationship with the Turks. Nonetheless, “we have no intention of fighting a war with Turkey,” Lavrov said.