Penetrating Counter-Air: What Comes After the F-22 Raptor and F-15C Eagle 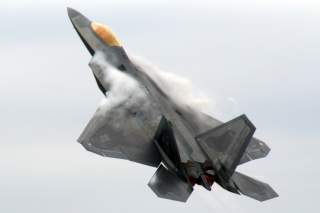 The United States Air Force is in the process of completing its initial research on a next-generation air superiority capability to replace the Boeing F-15C Eagle and Lockheed Martin F-22 Raptor fighters. Once such research is completed, the service will embark on an 18-month analysis of alternatives (AOA) starting this coming January to determine exactly what kind of capabilities it will need to gain and maintain control over the skies in the post-2030 threat environment. By then—in the year 2035—the stealthy F-22 will be 30 years old while most the F-15C fleet will be more than 50 years old. Thus, while the Air Force has not made any decisions on what a future air superiority fighter might look like, the service says that the so-called Penetrating Counter-Air (PCA) capability will be designed to meet threats that an upgraded F-22 and F-15 fleet cannot.

“We understand what the threat is going to be like in the future,” said Col. Tom Coglitore, chief of Air Combat Command’s Air Superiority Core Function Team in an interview with The National Interest. “We understand what our current and projected capabilities will be and will compare them to the future threat.  If there is a gap, then we will likely pursue the development of a new capability if we cannot modernize an existing capability to fulfill our need.”

Essentially—as Coglitore explains it—the PCA is the air domain platform component of a future “family of capabilities” for air superiority. But that family of capabilities is more than just the PCA aircraft itself, it includes basing and logistics, communications, intelligence, surveillance and reconnaissance (ISR), command and control, as well as other platforms and weapons—both existing and future. Indeed, for the Air Force, air superiority will likely move beyond just the realm of kinetic actions to include non-kinetic effects such as electronic attack and cyber-warfare, Coglitore said.

Basing and logistics—while often overlooked—are a crucial component of modern air warfare, especially as a resurgent Russia and an increasingly powerful China develop long-range precision strike capabilities. China has developed a host of cruise and ballistic missiles that are capable of hitting U.S. bases in the Western Pacific while Russian forces possess long-range weapons such as the Kalibr-NK and Kh-101 stealthy long-range cruise missiles that can threaten U.S. bases in Europe and the Middle East. “We definitely need to be able to operate from locations, and they need to be secure,” Coglitore said. “We must be able to operate out of locations necessary to create the effects wherever they are needed.”

The Air Force is also working on concepts to secure its aerial refueling tanker fleet as part of its future air superiority efforts. The Air Force is aware that both the Russians and the Chinese expect to attack the service’s vital tankers—the very sinews that hold U.S. air operations together—as part of their efforts to defeat any American-led air campaign. Indeed, both the Russians and the Chinese have developed long-range air-to-air missiles specifically designed to attack those critical nodes. While some of the service’s longer-range plans call for developing a stealthy tanker—the Air Force is working on contingencies for the nearer-term to mitigate the threat—which the service takes seriously.

“That is a strategy others have advertised and we’re familiar with,” Coglitore said. “We’re analyzing what potential adversaries have indicated they would do and then we obviously have to come up with our own capability to make sure we can still conduct the mission and create the effects desired. So, we’re aware is the short answer and we will be prepared to counter it.”

One of the potential ways that the United States would counter such threats is by increasing the range and persistence of its aircraft, but the problem is the inherent size limitations of a fighter. “Fighters tend to be small and so their ability to persist can be seen as a limitation, so that’s something that we will definitely be looking at to see if we can change that aspect—or if we even need to,” Coglitore said.

Range and persistence have long been a problem for fighter aircraft—and it is a problem even during operations in relatively permissive environments. One example of that was the 2011 operation over Libya—which was difficult despite the North African nation’s antiquated air defenses because of the sheer distances involved. Indeed, for the Air Force, such distances could drive unaffordable force structures if future platforms have the same attributes as the service’s current aircraft fleet.

“Libya was a challenge for us,” Coglitore said. “The distances to conduct operations in Libya was a challenge. You had aircraft operating from Italy, flying three hours down to the Gulf of Sidra to cover the coast of Libya which is 1100 miles long. You do that math even with fighter airspeeds and you’ll find the surface-to-air threat wasn’t what we were concerned about, the tyranny of distance was itself was the challenge.”

To ensure that the Air Force is ready to meet the challenge, the service will be looking at its tanker requirements as part of the PCA study. “In our examination of the PCA requirements, we will eventually look at the tanker force structure,” Coglitore said. “One could argue that if you have a longer range platform, you could have a smaller tanker force structure.  Conversely, smaller platforms may drive larger numbers of smaller tankers which may or may not be more advantageous.”

The other problem with fighter aircraft is that because of their small size, such machines inherently have a limited payload. Current generation fighters like the F-22 and the Lockheed Martin F-35 carry a limited payload internally, which could be a limitation during future combat operations. “It’s kind of a bummer if you drive three or four hours and you can only carry, say, two bombs or two missiles or whatever and now you have to go home to reload,” Coglitore said. “So the force structure is significantly impacted by that tyranny of distance—or your ability to go far and carry the requisite number of weapons to conduct that mission.”

Thus to solve those limitations, a future PCA might be a significantly larger aircraft that today’s fighters—designed to operate at far greater ranges while carrying a far greater ordnance load. Those requirements for range, persistence and payload will have to be balanced against the need for stealth, electronic warfare capabilities, speed, maneuverability and other traits. “You’re looking at all those trades we’ll be playing in our analysis and presenting to our senior leaders for decisions,” Coglitore said. “I think we’ll have several good options.”

Many of the Air Force’s potential future requirements might seem to be contradictory, but new technology might make such a plane technically feasible. Indeed, a very large fighter with a very large payload, huge range which is also extremely stealthy while being extremely maneuverable would be an extreme technical challenge with current technology. However, new technology such as adaptive cycle engines—which the Air Force is currently developing with General Electric and Pratt & Whitney—will likely solve many of those potentially contradictory requirements. “The bottom-line is it’s going to have to be a variable-cycle engine to meet those kinds of needs and not be a humongous airplane,” Jeff Martin, General Electric’s expert on sixth-generation fighter propulsion told me some time ago.

Stealth will almost certainly play a role in a future PCA—should the Air Force analysis show that a requirement for such an aircraft exists. But the service is also likely to heavily invest in electronic warfare capabilities for the next-generation air superiority fighter. The Air Force sees electronic attack as one of many potential requirements for survival in the 2030 plus timeframe, Coglitore said. The PCA will likely use a combination of stealth, electronic attack and other factors such as speed to survive. “There is a balance out there,” Coglitore said. “There are many ways to achieve survivability.”

The Air Force is also looking at more exotic technologies such as directed energy weapons. However, while the service is looking at the possibility of laser weapons, the technology has thus far failed to deliver on its promise. The Air Force will have to come up with a decision point on when to cut off promising but immature technologies from being included in the program. “That’s beauty and difficulty of this problem we have,” Coglitore said. “There are so many options.  Each new technology could have a cascading effect on several key attributes of a future platform, providing opportunities in different corners of the trade-space block.”

If the Air Force decides to proceeds with developing a PCA, the service could likely field an operational aircraft in the mid-2030s. Increasingly, as Russia, China and other potential adversaries advance their capabilities, current American capabilities are increasingly challenged. Thus, ultimately, the Air Force will need to develop a new air superiority fighter to maintain American military supremacy. “Our adversaries have advanced both in terms of their platform and weapons maneuverability but we have advanced too, and I think that has fundamentally changed how we will conduct air-to-air operations in the future,” Coglitore said.