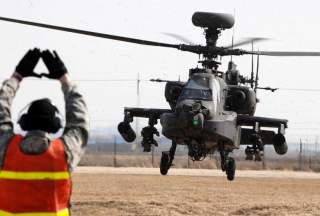 US Apache helicopter attacks against ISIS are further leading the Pentagon to rev up HELLFIRE Missile deliveries and production plans in order to keep pace with the prospect of continued attacks and better anticipate combat needs for the future.

"U.S. Apache helicopters conducted the first strike against a Da'esh target in Iraq in support of Iraqi Security Forces in the Tigris River Valley June 12. The Government of Iraq approved the use of Apaches in support of ISF operations. The strike was vetted and approved through the same process the Coalition uses for all strikes. The Apache strike destroyed a Da'esh vehicle borne improvised explosive device (VBIED) near Qayyarah, Iraq," Christopher Sherwood, a Department of Defense spokesman, told Scout Warrior.

The war against ISIS has depleted existing inventory of the weapon and generated a fast-growing national and international demand for HELLFIRE missiles, Army officials told Scout Warrior.

“Production of HELLFIRE has increased for quantities ordered in Fiscal Year 14 and Fiscal Year 15,” Dan O’Boyle, spokesman for Program Executive Office Missiles and Space, said in a written statement.

While Army officials did not provide specific numbers of production increases or plans to provide particular allied nations with HELLFIREs, the Pentagon has requested $1.8 billion in its 2017 budget for munitions, bombs and missiles needed to replenish or maintain stockpiles and sustain the attacks against ISIS.

“The "Romeo" variant is an example of how these efforts result in a more capable missile that will maintain fire superiority for the foreseeable future,” O’Boyle said.

Although the HELLFIRE began as an air-to-ground weapon, the missile has been fired in a variety of different respects in recent years. The Navy has fired a Longbow HELLFIRE from a Littoral Combat Ship, or LCS, to increase its lethality; the Navy's 2017 budget request asks for Longbow HELLFIRE missiles, beginning with the LCS surface-to-surface mission module, Navy officials told Scout Warrior.   Also, the Army has fired the weapon at drone targets in the air from a truck-mounted Multi-Mission Launcher on the ground and international U.S. allies have fired the HELLFIRE mounted on a ground-stationed tripod.

As part of a separate effort, the Air Force did request and receive $400 million in reprogrammed dollars to address an air-to-ground munitions shortage, particularly with Hellfire missiles.

"The Air Force worked with the Army to re-prioritize HELLFIRE missile deliveries to the Air Force, requested additional funding for HELLFIRE missiles, reduced aircrew training expenditures, and is working a procurement plan to increase production to reconstitute munitions stocks as quickly as possible," an Air Force official told Scout Warrior.

While precision-guided air-to-ground weapons are typically needed during aerial bombing efforts, they are of particular urgent value in the ongoing attacks on ISIS. ISIS fighters regularly hide among civilians and at times use women and children as human shields, making the need for precision all the more pressing.