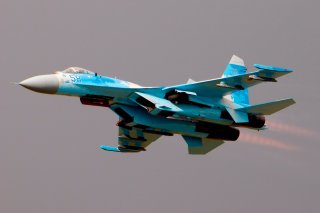 “A major thrust of the National Defense Strategy oriented on great power competition: specifically, Russia and China,” Lt. Gen. Anthony R. Ierardi, director of force structure, resources and assessment on the Joint Staff told reporters at the Pentagon on Feb. 12. “And, in this respect, our investments to support activities, both capability and posture, in Asia and Europe are an important aspect of this budget.”

As undersecretary of defense (comptroller) David L. Norquist explained, great power competition has overshadowed terrorism as the Pentagon’s major focus. “Great power competition, not terrorism, has emerged as the central challenge to U.S. security and prosperity,” Norquist said. “It is increasingly apparent that China and Russia want to shape a world consistent with their authoritarian values and, in the process, replace the free and open order that has enabled global security and prosperity since World War II.”

Because of the renewed challenge from peer-level competitors—something America has not faced since the collapse of the Soviet Union in 1991—the Pentagon is investing in capabilities that are needed to take on other great powers head on. “Our nation's strategy seeks areas of cooperation with competitors from a position of strength,” Norquist said. “But we recognize that, if unaddressed, the eroding U.S. military advantage versus China and Russia could undermine our ability to deter aggression and coercion in key strategic regions.”

Ierardi highlighted some of the key investments in the “Indo-Pacific” region, which are directed toward countering Beijing’s growing military might. “Some of the key enhancements with regard to Asia including continued investment in air and space superiority; procurement of additional weapons systems, including the Virginia payload module for our Navy submarines; procurement of additional P-8As, three additional in this budget; and work to increase naval presence appropriately as this strategy is implemented in the Pacific, to include infrastructure investments,” Ierard said.

To counter the resurgent threat from Russia, the Pentagon is increasing its presence in Eastern Europe. “In Europe, we continue robust increases in our investments to enhance Army pre-positioning stocks and responsiveness from Europe, including the enhancement of a second armored brigade combat team's worth of equipment in an Army pre-positioned set; replenishment of wartime stocks, including preferred and advanced munitions and increased lethality of each; and expansion and enhancement of air bases to support our operations, as appropriate, in Europe,” Ierard said.

Ierardi noted that warfighting readiness continues to be a key goal for the Pentagon. “Warfighting readiness continues to be an emphasis that Secretary Mattis makes from his arrival in the department,” Ierardi said. “Last year, and continues with this budget, with a robust budget to support full-spectrum readiness recovery across the board in the joint force, advances the department's multi-pronged, multi-year approach to enhance readiness, and to do so in a way that orients on major competitors, and have a full-spectrum capability would include enhancements at the individual level, as well as collective level, in our joint force units, and would support combatant command exercises and enhancements to support joint training capabilities, reassuring allies and providing for our presence abroad.”