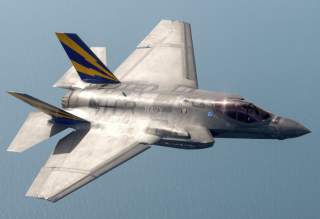 Last summer, F-35 program officer Lt. Gen. Bogdan said the F-35’s logistics system was “the brains and blood of operating this weapons system.” Despite many fixes, the aircraft’s Autonomic Logistics Information System (ALIS) is so flawed that government auditors believe the computer system may not be deployable. These problems may also delay the Air Force’s declaration of Initial Operational Capability.  And now, in a surprising twist, General Bogdan is saying ALIS is not really critical after all, insisting the F-35 can fly without it for 30 days.

F-35 supporters enjoy telling people how the plane is a “flying computer,” as if that alone makes it worth the hundreds of billions of dollars spent so far. Lockheed Martin goes one step farther, calling it a “supercomputer” in its own promotional materials. ALIS is the ground-based computer system meant to diagnose mechanical problems, order and track replacement parts, and guide maintenance crews through repairs. It also allows pilots to plan missions and later review their performance. At least, it’s supposed to do all of those things. So far, the software has been so flawed that maintenance crews have had to resort to time-consuming workarounds. In one instance, maintainers even had to manually burn data onto CDs and drive off base to send the massive files across a civilian WiFi network.

The plane is absolutely dependent on computer technology and millions of lines of software code to operate. So the fact that ALIS is years behind schedule and plagued with bugs is particularly disturbing. The Government Accountability Office has now released a report confirming POGO’s earlier reporting: flaws in ALIS can ground the entire fleet.

The program office dismissed the gravity of this finding, a position that puts the office at odds with itself. Testifying before Congress in 2014 and explaining the Joint Program Office’s renewed development efforts, General Bogdan said “The enterprise now deals with ALIS as if it is a ‘weapons system’ and a critical part of the F-35 program.”

Also from 2015, Assistant Secretary of the Navy Sean Stackley said that “the responsiveness, the timeliness of ALIS information for the maintainers and for the war fighter is at the top of our priority list.”

And just this year, General Bogdan said, “It is a software-intensive system that connects to almost every piece of the F-35 program.”

Secretary Stackley also said recently  “ALIS has yet to meet its full promise and we'll need to go the full distance in that regard if we're going to succeed in meeting our goals for reducing the ownership cost and increasing the operational availability for this complex aircraft.”

For years, F-35 advocates have been spending the American people’s money on this elaborate logistics system, telling them the plane can’t fly without it. The DoD’s most recent estimate puts ALIS spending at $16.7 billion over the life of the F-35, though the GAO report questioned the accuracy of this estimate, noting, “a DOD-commissioned plan found that schedule slippage and functionality problems with ALIS could lead to $20-100 billion in additional costs.” For a price tag that big, someone ought to know if the system is even required.