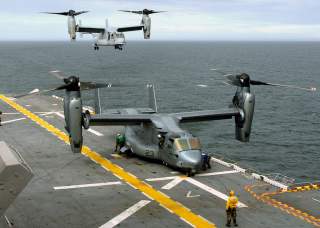 The globalization of technology has set off an entirely new arms race for which the Pentagon is not prepared. The question that should haunt U.S. defense officials is how long before China and other rising powers will militarize commercially available off-the-shelf technology (COTS).

Generals and admirals at the Pentagon fret about China’s ambitious military modernization plan. Cringing at the potential of a future war in the Western Pacific might involve Chinese missiles and submarines capable of overpowering America’s military. How the Pentagon moves to respond, however, calls for a fresh discussion on how China is building a technologically superior military.

The Pentagon for years has accused the Chinese government of industrial espionage and of reverse engineering U.S. weapons designs. The problem with this mindset is that it assumes that the crown jewels of defense technology reside in protected silos. That was once the case but no longer.

COTS being produced in Silicon Valley—virtual reality, robots, artificial intelligence and sophisticated predictive algorithms—have emerged from the consumer tech world to become essential building blocks of the next wave of military systems. And whereas China has shown a voracious appetite for these technologies, the Pentagon continues to pursue traditional innovation methods, working with a limited cadre of defense industry firms that are versed in government procurement.

In response to China’s ascendance and Russia’s resurgence as military powers, the Obama administration sought to revolutionize the Defense Department’s buying bureaucracy. The Pentagon in 2015 and 2016 opened technology outreach hubs (Defense Innovation Unit Experimental or DIUx) in Silicon Valley, Boston, and Austin, hoping to attract startups and other “nontraditional” firms from the commercial world. The Trump administration—with many top jobs still unfilled at the Pentagon—has hinted it will continue to push forward with these efforts, but the tech industry so far has been less than enthused about selling its cutting-edge products to the government.

Meanwhile, “China is buying technology at a rapid pace,” says Tim Greeff, a tech entrepreneur who is now CEO of the National Security Technology Accelerator, a nonprofit consortium that connects government agencies with the private sector.

In areas like robotics and artificial intelligence, it is striking that multinational corporations like Google and Facebook, and government buyers from countries like China are “getting there before the U.S. government,” he says. Even not knowing specifically what China is after, “It’s safe to say that if they are first to get the technology, they will be the first to realize the advantage.”

It is not hard to envision how China might apply consumer technology for military purposes. With virtual reality systems, training of military forces can be sharpened and accelerated. Using advanced propulsion technology from the space sector, it could make missiles that can travel across the globe in one or two hours. And it could take smart machines and robots and construct submarines that could patrol the oceans autonomously.

“This is a global competition,” says Greeff. “China’s military confronts the same technology challenges the U.S. military faces.” With technology being so widely distributed, winning this arms race is about moving fast to acquire technology and apply it. China only spends a fraction of what the United States spends on defense technology, but “is able to get resources and purchase more quickly.” The Pentagon, conversely, is hobbled by a maze of procurement regulations that put off vendors and restrict access to emerging technology.

U.S. defense leaders, broadly speaking, know what the military needs to modernize and stay ahead of rising powers. However, the Pentagon’s buying system is a major roadblock. It worked when the government drove the innovation train, and the private sector followed. Now it is the complete reverse.

The defense procurement rulebook over the years has gotten thicker and more complex. It was created to prevent fraud, waste, and abuse of taxpayer funds, although it may have reached a point where it needs a serious scrub, Greeff suggests. “Improprieties happen anyway. By making it so complicated, you actually limit competition.”

Tech companies that are not established federal contractors have little to no motivation to sell to the Defense Department, says Meagan Metzger, founder of DCode42, a company that mentors firms and helps them commercialize their products.

How many investors or shareholders are going to want to wait years for a Pentagon contract when they can sell to China this week? How many startups are going to pay $20,000 to write a proposal to bid on a government contract? That does not mean they are not patriotic, says Metzger. It is just that commercial businesses are under enormous pressure to make money.

Another obstacle for tech firms: The Pentagon tends to want to work with established contractors that speak the government’s language and know how to follow the Pentagon’s arcane contracting rules. Most incumbent federal contractors, she says, are not motivated to bring in cutting edge technology. “They make a lot of money doing what they do. They have had the same contracts for 20 years, making good margins.”

One bit of good news for the Pentagon is that not all tech companies are shunning the government. Some are “tired of building the next Snapchat” and are seeking a more meaningful challenge, Metzger says. “A lot of newer companies want to solve real mission problems.” They want to build an app that can predict the next terrorist attack, or that can help veterans cope with PTSD. The question is whether the Pentagon will be smart enough to grab such opportunities.

Metzger has been working with a company that used “machine learning” technology to develop a system that detects incoming aerial drones and takes them down using another drone. That sounds like something the military could use, but the company is not interested in selling to the Pentagon. Its target customers are private sector firms that fear corporate espionage.

The first and second offset strategies were less strategies than the ability to advance existing technologies into what became the Atomic Bomb in the first, and the advanced intelligence, surveillance, and reconnaissance along with advanced battle management in the second offset.  To achieve the third, exploiting COTS to our advantage may be the best chance of hedging against emerging near-peer competitors such as Russia and China.

Sandra I. Erwin is a journalist specialized in national security. She is the former editor of National Defense Magazine. She can be reached at [email protected].

This originally appeared at RealClearDefense here.