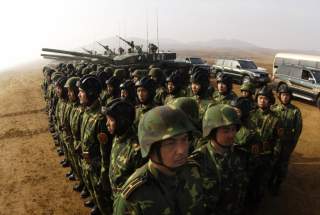 The People's Liberation Army released a new 'action-packed rap' recruitment video a couple of days ago. A couple of the lines in the video have gained some attention such as: 'Are you afraid? No! Are you afraid? No! Just need the order to kill kill kill!' and 'always think about the mission; the enemy forever in your eyes.' Catchy.

It's a pretty slick ad. Although it could be slowed down from its eye-watering, Clockwork Orange-esque pace. What is included in the video is interesting though. While most of the shots are of seemingly smooth infantry manoeuvres and hostage rescues, there is a big focus on 'informationised' warfare: satellites, space launches, global positioning systems and AWACS planes. Also featured is a large segment of China's mobile missile force, the main part of its growing anti-access and area-denial capabilities.

By and large, the image of a modern, highly trained and mobile military force largely represents the direction and intention of the recent organisational and doctrinal reforms instigated by President Xi Jinping. Interestingly, the one thing missing was a feature on China's cyber forces. The US Air Force started recruiting ads for its cyber division as far back as 2008. Can't be long before China follows suit.