Phantom Express: The Super Spaceplane Boeing and DARPA Hope to Make a Reality 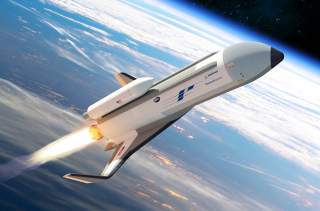 Earlier this month, Boeing and the Defense Advanced Research Projects Agency (DARPA) announced that they hope to build a new space plane to quickly carry satellites and other payloads into orbit. Called the Experimental Spaceplane (XS-1) program, the new robotic spacecraft would be an autonomous, reusable spaceplane. The spaceplane would be used to lift a small expendable upper stage aloft to where it could launch a small satellite of about 3,000 pounds into low Earth orbit.

“Phantom Express is designed to disrupt and transform the satellite launch process as we know it today, creating a new, on-demand space-launch capability that can be achieved more affordably and with less risk,” Darryl Davis, president of Boeing Phantom Works, said in a statement.

The idea behind Phantom Express is that as a reusable spaceplane, it could be turned around and launched back into space quickly. Conventional rockets can be used just once while the U.S. Space Shuttle program—which was also reusable spaceplane—is a now a distant memory. But even then, the Shuttle did not have an especially quick turnaround time.

“The Aerojet Rocketdyne AR-22 engine, a version of the legacy Space Shuttle main engine, would power the spaceplane,” reads a Boeing statement. “It is designed to be reusable and operates using liquid oxygen and liquid hydrogen fuel.”

But while the Phantom Express reuses some of the Space Shuttle’s technology, it offers advances in other areas. It would offer a much more advanced airframe design as well as new third-generation thermal protection. But the air vehicle would be far smaller and lighter than the Space Shuttle—nor would it need to be built to withstand quite the same stresses as its predecessor.

“Once the spaceplane – called Phantom Express – reaches the edge of space, it would deploy the second stage and return to Earth,” Boeing states. “It would then land on a runway to be prepared for its next flight by applying operation and maintenance principles similar to modern aircraft.”

Boeing and DARPA are planning to jointly invest their money into the development of the Phantom Express. The two entities hope to conduct a demonstration of 10 flights over 10 days—a feat which is unprecedented. If the experiment works, the Phantom Express could be a revolution in space launch technology.