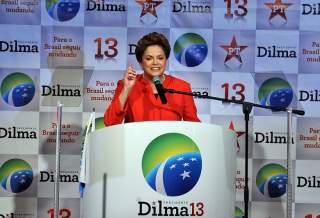 After nearly nine months, Brazil’s impeachment drama is over.

The process ended on a curiously subdued note: the Senate’s questioning of Dilma Rousseff on Monday was a staid affair, and Tuesday’s speeches were calculatedly calm and measured. By the time the Senate began to vote yesterday, Rousseff’s removal was a foregone conclusion. But the civilized, even boring, proceedings obscured an important objective of this week’s debates: shaping the historical narrative that will guide each side’s supporters over Michel Temer administration’s next twenty-eight months in office.

On the Senate floor, Rousseff and her defenders stuck tenaciously and defiantly to script: the fiscal pretext for impeachment was weak and no previous president had been held responsible for the same errors; the economic crisis was not her doing but the result of international circumstances she could not control; and she herself never personally benefitted from the corruption that took place during her presidency. Rousseff was impressive, showing all of the qualities that led President Lula to choose her as his successor: attention to detail, intense message discipline, and an unwillingness to cede any ground. Most important to the Workers’ Party (PT) narrative, she returned over and over to the theme that when they lost at the polls in 2014, “sectors of the economic and political elite” began conspiring against her. By her account, the impeachment battle had its origins in Rousseff’s principled refusal to bargain with the former Chamber of Deputies President Eduardo Cunha, who is deeply enmeshed in his own bribery scandal but has yet to be removed by Congress. Rousseff was supported from the wings by twenty former ministers, her predecessor and mentor Lula, a number of PT bigwigs, and the starpower of crooner Chico Buarque.

The opposition, meanwhile, hammered home the depth of the economic, political, and moral crises Brazil faces. They honed in on the narrow text of the impeachment petition—premised on arcane minutia about unauthorized spending and improper loans to the government by state banks—but also sought to show that the transgressions for which she could have been impeached were much broader. They repeatedly reminded Rousseff of the bait-and-switch between the lofty promises made during her 2014 campaign and the austere policies that were actually implemented during her second term, made grand statements about the usurpation of legislative functions by her administration, and noted that almost all of the costs of her fiscal maneuvers were borne by taxpayers. They repeated the now well-trod line that if Rousseff was not complacent with corruption she must be incompetent, and noted that while Rousseff was not personally enriched by corruption, her presidential campaign was financed by ill-gotten means. Most important to their long-time narrative about the legitimacy of impeachment, they noted that all three branches of government were represented at the Senate trial, and that by her very presence, Rousseff was acknowledging the legitimacy of the impeachment process. What sort of golpe is this, they asked, in which the defendant has the right to self-defense? They were supported from the wings by a handful of youthful leaders from the street protest movement.

Whatever the arguments, what best explains the impeachment vote is exhaustion. It has been a turbulent three years since the first street protests erupted in July 2013, and many Brazilians simply want the political crisis to go away. In a poll published by Istoé magazine over the weekend, nearly two-thirds of Brazilians said that if they were senators, they would vote to see Rousseff go. That doesn’t mean that Temer is beloved: when asked who should govern Brazil, more than a third (35 percent) of those polled spontaneously responded that they would choose neither Temer nor Dilma. There is also a solid core of opposition, with 30 percent opining against Dilma’s impeachment. But by and large, Dilma had lost much of the public support she had when elected two years ago, and the Petrobras scandal appears to have greatly diminished her mentor Lula, whose ratings continue to decline as police and prosecutors close in on his family’s questionable dealings.

What comes next for Brazil? This blog has repeatedly noted the importance of legitimacy to Brazil’s impeachment process. The PT narrative of golpismo by neoliberal forces on the right was artfully deployed by Rousseff and is likely to be a core message of the PT in coming years. This drumbeat will keep Temer and his coalition on the defensive, while turning attention away from the Rousseff administration’s own failures and the PT’s involvement in the corruption scandal.

Temer has been playing a complicated game since he became interim president in May. On the one hand, he has been trying to keep the rowdy impeachment coalition in check, promising whatever he could offer to wavering supporters. On the other, he and Finance Minister Henrique Meirelles have been trying to convince investors that the economic team has a coherent plan for recovery that will come together when the political stars align. These dueling priorities were especially evident in the renegotiation of state debts, where investors’ cautious support for an emergency renegotiation lapsed into disappointment as Temer made repeated concessions to state governors in exchange for political support. Temer’s Janus-faced approach may also have reached a natural limit: the PSDB and the DEM parties in late August threatened to withhold support if Temer moved forward on planned wage increases for the judicial branch, which might have earned him short-term political support from some sectors, but would have cascading effects throughout the civil service and a brutal impact on the rapidly deteriorating fiscal results.

Now that he is confirmed in the presidency, Temer will be under pressure to commit to the fiscal reforms that were impossible while he was a temporary stand-in. The challenge is significant, in at least three regards. First, the left’s criticism of the new government’s “neoliberalism” will limit what Temer can realistically achieve on the fiscal front. Temer seems to be aiming for a constitutional cap on spending that will promise hard choices about spending in the future while providing his administration some credibility gains in the present. But even this middle of the road solution will be politically difficult, requiring changes to constitutionally guaranteed health and education budgets. The second major reform would be to social security, reducing special privileges for some professions and raising the minimum retirement age, in an effort to cut one of the largest areas of government expenditure and expand on reforms undertaken by Presidents Fernando Henrique Cardoso and Lula. So far, the details of these reform proposals are nebulous, but they are likely to become more concrete by November, and the opposition will pillory Temer for even the slightest proposed change in social spending.

The second major challenge is that the timetable for reform is remarkably short. All political oxygen between now and the end of October will be sucked up by the 2016 municipal elections, and then again during much of 2018 by the presidential election. These two contests will be the most wide-open elections of the post-1985 democratic era, in light of new restrictions on corporate contributions, the effects of the corruption scandal, the weakening of the two most important parties in the Brazilian party system (the PT and the PSDB), and the widespread “throw the bums out” sentiment expressed by voters. The field for the presidential race will begin to form by late 2017. As a consequence, the reform calendar is essentially restricted to fourteen months between November 2016 and late 2017. Considering that many less controversial constitutional reforms have taken much longer, and that so many different political actors will be angling for advantage as they look ahead to 2018, Temer will have a tough slog.

The third major constraint is the ongoing Lava Jato investigation, and political scandals that keep popping up around it. It is hard to avoid the conclusion that Temer’s coalition is held together at its core by a pragmatic and ideologically malleable center—“Centrão”—that is unsympathetic to the Lava Jato investigation and the increasing power of prosecutors and judges. I wrote recently about recent moves to dilute accountability reforms in Brazil, with support from actors across the political spectrum. These pressures seem likely to build, if only because so many different political forces are under threat. Temer has already been forced by public pressure to dismiss three ministers caught up in various scandals, he himself has been mentioned by witnesses in the Lava Jato investigations, and he is still the subject of an electoral court case investigating the financing of the 2014 Rousseff-Temer ticket. Meanwhile, disgraced former Chamber President Eduardo Cunha has not gone away, and the mid-September vote on his removal will be a bellwether of how well legislators have understood the lessons of voter anger. Concurrently, the progress of a plea bargain by Marcelo Odebrecht, scion of the construction fortune, has already led to allegations of illegal donations to candidates across the political spectrum, from the PT through Temer’s PMDB to the PSDB. It is symptomatic that despite the low-legitimacy moment, Temer has not dared to suggest a political reform that might change some of the perverse incentives that have led to the campaign finance abuses that fueled the Petrobras scandal. There is little prospect thatLava Jato or any of the many other parallel investigations will go away any time soon.