Poll: Most Americans Want to Stop People on Food Stamps from Buying Soda 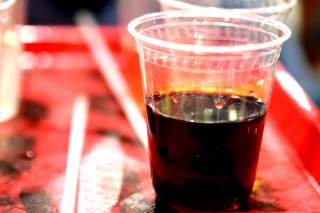 Most Americans would be fine increasing the amount of benefits in food welfare programs, as long as there are more restrictions on what those benefits can buy, according to a survey conducted by the School of Public Policy at the University of Maryland.

Overall, about 57 percent of those surveyed thought that the amount individual households receive in food stamps, or benefits, “seemed low,” according to the report released Wednesday.

Only 19 percent of Republicans thought food stamp benefits per household, which was an average of $140 a month for individuals living alone and $243 for a single mother with one child, should be reduced. Thirty percent of all respondents said food stamp benefits was “about right,” and only 12 percent believed the amount of benefits were too high.

Lawmakers and poverty experts have debated for years about whether to restrict food stamps from being used to buy junk food, cakes, candy and sugary drinks. The idea has been gaining traction among experts and, as the University of Maryland study suggests, among the American public, but Congress has been slow to advocate for a nation-wide ban on buying junk food with food stamps. (RELATED: Why Restricting Food Stamp Users From Buying Junk Food Always Fails)

The survey shows that, depending on the item restricted, a vast majority of Americans favor restricting food stamp junk food purchases. “Large bipartisan majorities favored disallowing sweetened sodas and candy,” the survey said. A majority opposed banning chips, snacks, crackers and ice cream from the food stamps program. Bans on cookies, snacks, crackers and ice cream were favored by an overall majority, but not a majority of Democrats.

The debate on whether to ban certain items from the food stamps program, or at least whether to let states test restrictions on unhealthy items, will likely intensify over the next few years as Congress writes the 2018 Farm Bill, which includes rules governing food stamps spending.

Maine and several southern states have recently requested waivers from the Department of Agriculture to restrict certain food items from welfare programs in their own state. The USDA, however, has so far refused every request.

Families on food stamps typically buy the same kind of groceries that other families purchase, except when it comes to soda. A recent USDA report revealed that food stamps recipients spend more on soda than on vegetables, bread or fruit.

The study, which looked at all purchases made at an unnamed nation-wide grocery store, 9.3 percent of all food stamp purchases in the $74 billion food stamps program went to sugar sweetened beverages (excluding fruit juices). Sodas and sugary drinks accounted for 7 percent of non-food stamps purchases.