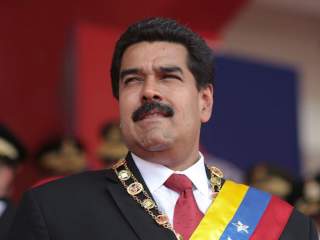 Venezuela is facing an electricity shortage so severe, that President Nicolas Maduro extended the national Easter holiday by decree to decrease demand for it. The government is effectively shutting down the country for five days with the hopes of staving off an impending infrastructural collapse. That’s right, the country with the largest proven oil reserves in the world is facing an energy crisis.

In spite of enjoying a decade-long oil bonanza, the government failed to invest in the maintenance of existing infrastructure, let alone in its expansion.

The problem: Venezuela is in the midst of a devastating drought and it lacks alternative means of producing energy. The grid is already stretched thin, and it can’t afford to lose Guri’s production.

The government’s response has been to throw money at the problem, ground the country to a halt with the hopes that it works, and in the mean time, pray for rain. Venezuelans have been forced to light candles and live their lives accounting for potential outages.

Yet, Venezuela’s Bolivarian Revolution is no stranger to energy shortages. In 2010, Maduro’s predecessor, Hugo Chavez, was forced to declare a national “electricity emergency” after similar conditions threatened to paralyze the country.

Chavez implemented rationing measures like rolling blackouts, industrial production reductions, and steep fines for overconsumption. Since then, “despite pumping more than $3.8 billion into the sector since 2010 to put 40 new plants on stream, lack of transparency, mismanagement and corruption continue to hobble regular access to electricity.”

If one is looking to understand the effects of twenty-first century socialism, look no further than its birthplace. It depends on oil exports for its income and on rain to keep the lights on.

The serial interventionism of a corrupt government has turned Venezuela into the regional basket case par excellance, but its failure to act in matters like these has proven to be equally damaging to the Venezuelan people.