Preemptive Strike: This Is How North Korea Would Start World War III 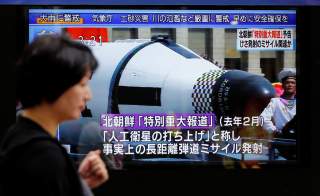 North Korea has achieved something remarkable: for an impoverished country with a GDP smaller than that of Rhode Island, it has built a nuclear and ballistic missile program. The result is a growing arsenal of nuclear weapons with an expanding level of reach. While North Korea’s nukes are in all likelihood meant for regime security, in the event of war, Pyongyang would attempt to deliver devastating nuclear strikes against American, South Korean and Japanese forces throughout the region, sapping them of the willpower necessary to topple the regime of Kim Jong-un.

North Korea is both more and less dangerous than it looks. While the country maintains a 1,190,000-strong armed force, one of the largest in the world, much of its equipment is obsolete. It is likely no longer likely capable of successfully invading South Korea. At the same time, it is assessed as having between ten and twenty nuclear weapons, and has tested a variety of ballistic-missile platforms, including medium-range, intermediate-range, submarine-launched and, as of July 4, intercontinental ballistic missiles. While many of these programs have had mixed success, particularly the Musudan missile, North Korea is clearly learning and advancing its abilities both in nuclear-weapons design and missile-delivery systems.

North Korea’s nuclear weapons are no longer useful in an offensive role, so the obvious next use is to preserve the regime of Kim Jong-un. Much like Saddam Hussein and Muammar el-Qaddafi, Kim Jong-un in part justifies his regime by his opposition to the United States. At the same time, however, he wants to avoid their fate. Nuclear weapons guarantee Kim security and freedom of action within his own country.

Still, in order to be a credible deterrent, Kim needs a credible warfighting doctrine for his nuclear weapons. The overwhelming nuclear firepower of South Korea’s ally, the United States, makes the prospect of a nuclear exchange between the two countries a disaster: North Korea has no ballistic-missile defenses and would face total destruction.

North Korea’s limited options mean the only way to plan to use nuclear weapons is to use them first, before they are destroyed. A preemptive nuclear attack, unleashed against South Korean political and military targets and U.S. military targets across the Asia-Pacific, that stuns its enemies and promises further devastation upon retaliation, is arguably the only way in which a nuclear North Korea can survive a conflict.

Other factors contribute to this reasoning. North Korea’s nuclear forces are small, and may be more vulnerable to attack than otherwise believed. The United States, South Korea and Japan have extensive intelligence, surveillance and reconnaissance (ISR) assets in the form of aircraft, drones and satellites that will actively hunt North Korea’s missile force down—after all, the country has only five hundred miles of paved roads. North Korea has little in the way of ISR, meaning that once a crisis begins it cannot detect a buildup of enemy forces and has no idea when it will be struck. The only way to guarantee a strike is preemptive is to launch early in a crisis, once the Kim regime has determined that war is inevitable.

What targets will North Korea hit? In South Korea, propaganda videos have made it clear that the the Blue House, the official residence of the South Korean president, is a target, as are South Korea’s National Assembly building, the headquarters of the National Intelligence Service and the Ministry of Defense. All of these buildings are located in the capital, Seoul. Depending on the North’s advances in nuclear-warhead miniaturization technology, these locations could be hit with high-explosive, chemical or nuclear warheads, using older, Scud-based Hwasong-6 or -7 missiles, or even KN-02 Toksa missiles.

Another major set of targets are U.S. installations in and around South Korea. Within South Korea, the new number-one target is the THAAD ballistic-missile defense battery. Destroying or disrupting the battery, particularly the AN/TPY-2 radar, would open the way for follow-on strikes against Osan Air Base, Kunsan Air Base, the headquarters of local U.S. forces at Yongsan Garrison in Seoul and the bulk of the Second Infantry Division at Camp Humphreys.

North Korean nuclear weapons will also strike U.S. facilities throughout the Asia-Pacific, particularly bases for forces reserved for a Korean conflict and those that act as logistical nodes for reinforcements from the United States. The U.S. naval bases at Yokosuka and Sasebo, Japan, Misawa and Kadena Air Bases, and Naval Air Station Atsugi would all be major contributors to the war effort that North Korea would like to see shut down. The most distant U.S. bases—for now anyway—that could face attack are those on the island of Guam in the Marianas.

North Korean nuclear strikes would not only destroy a considerable amount of allied war-making potential, but also kill South Korean and Japanese civilians and American military dependents. Bases such as Yokota, on the outskirts of Tokyo, are surrounded by densely populated civilian communities. The explosive power of a multi-kiloton nuclear weapon, even one that scored a direct hit, would guarantee heavy civilian casualties. A twenty-kiloton nuclear device, the largest device tested by Pyongyang, dropped on Yongsan Garrison in Seoul would kill an estimated thirty-four thousand civilians and injure 106,000 more. The same bomb dropped on Yokota Air Base would kill an estimated twenty thousand Japanese civilians and injure another forty-five thousand.

Not all of North Korea’s nuclear weapons would be expended in a preemptive strike. Pyongyang would have to hold onto a substantial number of weapons to make credible a claim to launch a second strike if Washington and Seoul retaliated or invaded the country. This is the ideal scenario from the North Korean perspective.

It’s important to remember that a North Korean nuclear attack is not inevitable, or even likely. Attack only becomes possible if and when Kim Jong-un calculates it actually increases his already slim chances of surviving conflict. A reaffirmation of American resolve to retaliate to nuclear strikes in kind would be an important gesture, especially as key allies remain shaken by the controversy over NATO’s Article 5 and President Trump. So long as Kim is convinced he cannot survive the use of North Korea’s nuclear weapons, a preemptive North Korean strike is extremely unlikely.