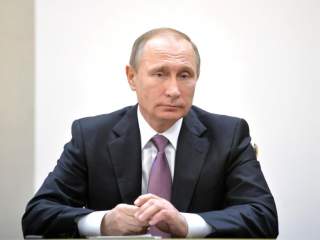 If nothing else, Vladimir Putin is a great political survivor. When protests broke out in Moscow four years ago against his return to the presidency, many in the West wrote him off (a widely cited work proposed to tell How Russia Fell in and Out of Love with Vladimir Putin). However, on December 3 Putin delivered yet another annual 'State of the Nation' address as President of Russia. Rarely has he been so popular.

Even today, Western commentators often give the impression that they've 'seen the future and the future is not Putin.' But surveys by Russia's independent Levada Centre provide little evidence of a brewing people's rebellion. On the contrary, the Kremlin is one of only three institutions that more Russians trust than distrust (the army is at 64 percent, and the Church and other religious organizations are at 53 percent). Fully 80 percent of respondents said they 'completely trust' Putin.

How should this be understood?

Mainstream Western media usually cast Putin's popularity as the result of Russians' heavy reliance on government-controlled television, i.e. 'brain-washing.' But such a one-sided view may misrepresent the relationship between power and public opinion. Tellingly, only 34 percent of Russians say they trust the media.

The 'brain-washing' theory also misses what is possibly the most significant feature of modern Russia: for the first time since the 1991 collapse of the Soviet Union (if not the 1917 revolution) government policies reflect the attitudes and opinions of the conservative majority of Russians rather than a Westernizing, neo-liberal (or Marxist) elite.

Since 1996, the Levada Centre has been asking Russians what they want of their presidents. Their expectations have changed little. In 2012 (that is, even before the outbreak of the Ukraine crisis), Russians' top four priorities were: restoring Russia's great-power status (57 percent versus 54 percent in 1996); law and order (52 percent versus 58 percent); a fairer distribution of the national wealth (49 percent versus 37 percent); and increasing the state's role in the economy (37 percent, unchanged).

Such attitudes reflect continuing nostalgia for elements of the Soviet system and dissatisfaction with the Westernizing path followed after the USSR's collapse. In 2012, only a minority (16 percent, up from 13 percent in 1996) believed Russia should continue to pursue the liberal reforms of the Yeltsin era and even fewer (5 percent down from 6 percent) thought convergence with the West something to be desired.

Overwhelming support for 'buying Russian'—above all, when it comes to groceries (91 percent)—confirms consensus around import substitution (a self-imposed response to Western sanctions) as a long overdue helping hand to Russian industry and, especially, farms.

Of course, this coincidence of government policies and public opinion doesn't make Russia a democracy. But such polls frequently function as democracy's proxy in the West, so why not in Russia?

The main point is, however, that Russia's 'conservative turn' since Putin's return to the Kremlin in March 2012—widely deplored in the West as a creeping authoritarianism with roots only in the wiles of Putin's mind—may be closer to the world view of Russia's conservative and patriotic majority than most Western governments would care to admit.

In foreign and economic policy, Russia's post-Soviet government may never have cleaved as close to the views of the majority as it does now. That's the view of Igor Okunev, a vice-dean at the Moscow State Institute of International Relations, whom I spoke with recently in Moscow.

"Historically, the Russian government has always been more liberal than the Russian population. Unlike Gorbachev and Yeltsin, what I think Putin has decided to do is accept this and use it as the basis for his support. That's been his strategy since the protests of 2011. That was when he decided to abandon the liberal minority and embrace the conservative majority."

Mikhail Remizov, director of Russia's Institute of National Strategy, shares this view, saying in a recent interview: "Russian democracy must by definition be conservative, populist, nationalist and protectionist." Until 2012, he said, the conservatives "who really enjoy the sympathies of the majority of the nation occupied the place of an opposition. Real power remained in the hands of the neo-liberal elite that had run the country since the 1990."

This has now changed. "Putin is falsely presented as a nationalist," said Remizov. "In a Russian context, he's a sovereigntist. But in general, the agenda of the Kremlin today is formed by the opposition of the 2000s: the conservative, patriotic majority."

Yet Western governments often treat Russia's minority liberal opposition as the avant-garde of a hidden liberal majority. To Dmitri Trenin, director of the Carnegie Moscow Centre, however, this is betting on the wrong horse. "This isn't just about Putin," he told a group I was with in Moscow. "It's about the nature of society as a whole. Putin has been able to rule this country in an authoritarian way with the consent of the governed." The imagined liberal majority looking to the West for emancipation doesn't exist. Russian liberals, he said, "have the same problem the revolutionaries have always had in Russia: they look down on the rest of the country as dupes."

But Trenin is just as pessimistic about the ability of Russia's present rulers to address the country's underlying problems. "We will have to expect some sort of upheaval. The dams will have to be broken somehow."

For all his popularity, then, has Putin returned Russia to its pre-revolutionary impasse?

In tsarist times, a bourgeois, liberal elite eager to imitate Western Europe socially, politically and economically clashed with the conservative and collectivist world view of an Orthodox peasantry (and their educated Slavophile patrons, most famously Dostoyevsky) unwilling to see Russia renounce its distinctive ways.

Between them, the Imperial government arbitrated ham-fistedly until, in 1917, the First World War swept it away, and a disciplined band of revolutionaries seized power in the name of a different Western ideology, Marxism.

Some think revolution will be Russia's fate again. Others (notably Chatham House expert Richard Sakwa) believe Russia's path to democracy lies in modifying the system that Putin has created. Indeed, the country's very consensus behind its president could mean that the next step in such a 'democratic evolution' is closer than we think. "This could be an ideal moment for Putin to experiment with political competition," says Remizov, "precisely because of the strength of his position."

All the same, Western governments shouldn't have too many illusions. If Russians' present sentiments are anything to go by, the catch-22 of Russian democracy, when it arrives, may be that it looks rather like Putin's Russia.

Matthew Dal Santo is a Danish Research Council post-doctoral fellow at the Saxo Institute, University of Copenhagen, where he is leading a project on history and identity in modern Russia. This article was originally published on the Interpreter.