Race and Slavery: What Does the Constitution Really Say? 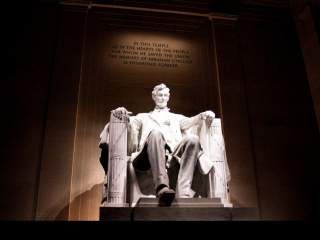 One hundred and fifty years ago this month, the Thirteenth Amendment officially was ratified, and with it, slavery finally was abolished in America. The New York World hailed it as “one of the most important reforms ever accomplished by voluntary human agency.”

The newspaper said the amendment “takes out of politics, and consigns to history, an institution incongruous to our political system, inconsistent with justice and repugnant to the humane sentiments fostered by Christian civilization.”

With the passage of the Thirteenth Amendment—which states that “[n]either slavery nor involuntary servitude, except as a punishment for crime whereof the party shall have been duly convicted, shall exist within the United States, or any place subject to their jurisdiction”—the central contradiction at the heart of the Founding was resolved.

Eighty-nine years after the Declaration of Independence had proclaimed all men to be free and equal, race-based chattel slavery would be no more in the United States.

While all today recognize this momentous accomplishment, many remain confused about the status of slavery under the original Constitution. Textbooks and history books routinely dismiss the Constitution as racist and pro-slavery. The New York Times, among others, continues to casually assert that the Constitution affirmed African-Americans to be worth only three-fifths of a human being.

Ironically, many Americans who are resolutely opposed to racism unwittingly agree with Chief Justice Roger Taney’s claim in Dred Scott v. Sandford (1857) that the Founders’ Constitution regarded blacks as “so far inferior that they had no rights which the white man was bound to respect, and that the negro might justly and lawfully be reduced to slavery for his benefit.” In this view, the worst Supreme Court case decision in American history was actually correctly decided.

Such arguments have unsettling implications for the health of our republic. They teach citizens to despise their founding charter and to be ashamed of their country’s origins. They make the Constitution an object of contempt rather than reverence. And they foster alienation and resentment among African-American citizens by excluding them from our Constitution.

The received wisdom in this case is wrong. If we turn to the actual text of the Constitution and the debates that gave rise to it, a different picture emerges. The case for a racist, pro-slavery Constitution collapses under closer scrutiny.

Race and the Constitution

The argument that the Constitution is racist suffers from one fatal flaw: the concept of race does not exist in the Constitution. Nowhere in the Constitution—or in the Declaration of Independence, for that matter—are human beings classified according to race, skin color or ethnicity (nor, one should add, sex, religion or any other of the left’s favored groupings). Our founding principles are colorblind (although our history, regrettably, has not been).

The Constitution speaks of people, citizens, persons, other persons (a euphemism for slaves) and Indians not taxed (in which case, it is their tax-exempt status, and not their skin color, that matters). The first references to “race” and “color” occur in the Fifteenth Amendment’s guarantee of the right to vote, ratified in 1870.

The infamous three-fifths clause, about which more nonsense has been written than any other clause, does not declare that a black person is worth 60 percent of a white person. It says that for purposes of determining the number of representatives for each state in the House (and direct taxes), the government would count only three-fifths of the slaves, and not all of them, as the Southern states, who wanted to gain more seats, had insisted. The 60,000 or so free blacks in the North and the South were counted on par with whites.

Contrary to a popular misconception, the Constitution also does not say that only white males who owned property could vote. The Constitution defers to the states to determine who shall be eligible to vote (Article I, Section 2, Clause 1). It is a little known fact of American history that black citizens were voting in perhaps as many as 10 states at the time of the founding (the precise number is unclear, but only Georgia, South Carolina and Virginia explicitly restricted suffrage to whites).

Slavery and the Constitution

Not only does the Constitution not mention blacks or whites, but it also doesn’t mention slaves or slavery. Throughout the document, slaves are referred to as persons to underscore their humanity. As James Madison remarked during the constitutional convention, it was “wrong to admit in the Constitution the idea that there could be property in men.”

Although these circumlocutions may not have done much to improve the lot of slaves, they are important, as they denied constitutional legitimacy to the institution of slavery. The practice remained legal, but slaveholders could not invoke the supreme law of the land to defend its legitimacy. These formulations make clear that slavery is a state institution that is tolerated—but not sanctioned—by the national government and the Constitution.

Reading the original Constitution, a visitor from a foreign land would simply have no way of knowing that race-based slavery existed in America. As Abraham Lincoln would later explain:

“Thus, the thing is hid away, in the Constitution, just as an afflicted man hides away a wen or a cancer, which he dares not cut out at once, lest he bleed to death.”

One could go even further and argue, as Frederick Douglass did in the lead-up to the Civil War, that none of the clauses of the Constitution should be interpreted as applying to slaves. The “language of the law must be construed strictly in favor of justice and liberty,” he argued.

Because the Constitution does not explicitly recognize slavery and does not therefore admit that slaves were property, all the protections it affords to persons could be applied to slaves. “Anyone of these provisions in the hands of abolition statesmen, and backed up by a right moral sentiment, would put an end to slavery in America,” Douglass concluded.

It is true that the Constitution of 1787 failed to abolish slavery. The constitutional convention was convened not to free the slaves, but to amend the Articles of Confederation. The slave-holding states would have never consented to a new Constitution that struck a blow at their peculiar institution. The Constitution did, however, empower Congress to prevent its spread and set it on a course of extinction, while leaving the states free to abolish it within their own territory at any time.

Regrettably, early Congresses did not pursue a consistent anti-slavery policy. This, however, is not an indictment of the Constitution itself. As Frederick Douglass explained: “A chart is one thing, the course of a vessel is another. The Constitution may be right, the government wrong.”

Congress and the Slave Trade

In his original draft of the Declaration of Independence, Thomas Jefferson called the African slave trade an “execrable commerce” and an affront “against human nature itself.” Because of a concession to slave-holding interests, the Constitution stipulates that it may not be abolished “prior to the year one thousand eight hundred and eight” (Article I, Section 9, Clause 1).

In the meantime, Congress could discourage the importation of slaves from abroad by imposing a duty “not exceeding 10 dollars on each person” (Article I, Section 9, Clause 1). Although early Congresses considered such measures, they were never enacted.

Early Congresses did, however, regulate the transatlantic slave trade, pursuant to their power “to regulate commerce with foreign nations” (Article I, Section 8, Clause 3). In 1794, 1800 and 1803, statutes were passed that severely restricted American participation in it. No American shipyard could be used to build ships that would engage in the slave trade, nor could any ship sailing from an American port traffic in slaves abroad. Americans were also prohibited from investing in the slave trade.

Finally, on the very first day on which it was constitutionally permissible to do so—Jan. 1, 1808—the slave trade was abolished by law.