Railguns and Lasers: The Navy's New Destroyer Could Have Some Killer Weapons 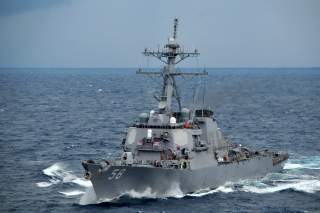 Raytheon engineers say Gallium Nitride is designed to be extremely efficient and use a powerful aperture in a smaller size to fit on a DDG 51 destroyer with reduced weight and reduced power consumption. Gallium Nitride has a much higher breakdown voltage so it is capable of much higher power densities, developers said.