Raptor's New Claws: The F-22 Stealth Fighter Is More Lethal than Ever 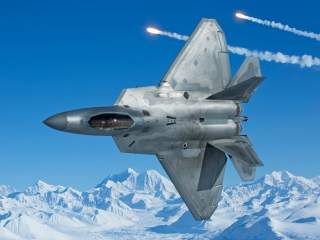 Until now, America’s premier air superiority fighter had been equipped with the antiquated AIM-9M version of the missile. The lack of a HOBS missile put the $140 million stealth fighter at a severe disadvantage in a visual range dogfight with other aircraft.

“Every aspect about this missile, it's a huge capability increase in all facets,” explained Lt. Col. David Skalicky, commander of the 90th Fighter Squadron at Joint Base Elmendorf-Richardson in Alaska.

“We can employ it in more scenarios, at greater range, and reach edges of the envelope we would have had a more difficult time reaching with the AIM-9M,” Skalicky said. “Similar to how the F-22 is a generation beyond the fighters that came before it, the 9X is a generation beyond the previous Sidewinder missiles we used before. It's a huge advance in lethality for the F-22.”

The F-22 Raptor units of the 3rd Wing—which includes the 90th Fighter Squadron and the 525th Fighter Squadron—are the first to receive the AIM-9X. But units flying the F-15 and F-16, as well as the Navy and Marine Corps’ F/A-18 Hornet squadrons, have been equipped with the new weapon for years.

It took the Air Force more than a decade to equip the Raptor with the AIM-9X because of the F-22’s obtuse avionics architecture—which is exceptionally difficult to upgrade. Even this recent addition of the AIM-9X is a jury-rigged interim measure called Update 5, which also includes an automatic ground collision avoidance system.

While the new software upgrade allows Raptor pilots to take advantage of the performance of the new missile, the jet’s targeting display will not show the correct symbology for the AIM-9X. Instead, the weapon will have the same displays as the current AIM-9M and pilots will have to compensate for the difference.

The situation will not be rectified until a new enhanced stores management system (ESMS) is added to the frontline Block 30 and Block 35 Raptors in 2018 with the Increment 3.2B hardware upgrade. With Inc. 3.2B, the F-22 will display the proper symbology for the AIM-9X. But even then, the F-22 will not have a helmet-mounted cueing system—which was deleted during the jet’s problematic development program in the late 1990s.

Raptor pilots will be able take advantage of many of the superior capabilities of the AIM-9X even without a helmet-mounted cueing system. But to fully exploit the outer edges of the new Sidewinder’s greatly expanded weapons employment zone, F-22 pilots will eventually need one.

The Air Force demonstrated such a capability using the Thales Scorpion helmet-mounted cueing system onboard the Raptor in 2014 at Nellis Air Force Base, Nevada. While the pilots gave the Scorpion systems a thumbs up, the service instead embarked upon a contest to field a new helmet-mounted cueing system on the powerful fifth-generation fighter by 2020.

The helmet that pilots don’t want is the one on the F-35—which is heavy and strains the neck during high-g maneuvers. Indeed, the Air Force’s stated requirements say that the service won’t accept any reduced field of view or any other performance degradation. “The helmet mounted assembly of the RHMD shall have a weight, center of gravity (CG) and principal moments-of-inertia that minimize risk of injurious neck loads during flight and ejection,” the Air Force requirements document states. “The helmet shall not force the pilot’s head forward, relative to the HGU-55/P, from the seat headrest.”

It’s only once the new helmet is fielded that the Raptor will realize its full potential. But, unfortunately for the Air Force, which had stated a requirement for 381 Raptors, only 195 F-22s—including test aircraft—were ever built. Right now, the Air Force only has 186 Raptors in its inventory, and of those only 143 are frontline combat aircraft. The breakdown is 123 combat-coded and twenty backup inventory jets according to the service’s Air Combat Command.