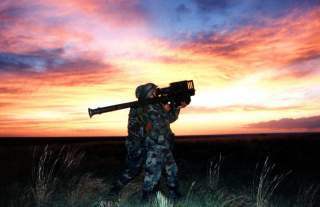 Raytheon and the United States Army have tested a new version of the venerable Stinger man-portable surface-to-air missile that is equipped with a proximity-fuze warhead. The new Stinger is designed to counter the increasing threat posed by the proliferation of enemy unmanned aerial vehicles on the modern battlefield.

“Stingers are usually loaded with direct impact warheads, which is appropriate for larger targets such as cruise missiles and aircraft," Kim Ernzen, vice president of Raytheon's Land Warfare Systems product line, said in a statement.

The idea is that for very small targets like disposable drones, the proximity fuze would detonate the warhead if the missile passed within a certain radius of the target. The explosion would create a cloud of shrapnel that would hopefully eliminate the target. In the case of aircraft—particularly smaller systems—it does not take much to hit a vital component and thereby take it down.

For the purpose of the Army’s recent test, two Stinger missiles modified with the new proximity fuzes intercepted a relatively small MQM-170C Outlaw and a smaller drone—which the Army did not identify.

Drones are rapidly proliferating on the battlefield—from the relatively basic units used by terrorist groups such as ISIS to the much more capable systems that major powers such as Russia and China are developing. Indeed, as Center for Naval Analyses researcher Sam Bendett has described for The National Interest, drones—particularly small, disposable systems for the Russian Ground Forces—are a growth industry for the Kremlin.

However, while a modified Stinger is a workable short-term solution, it is an expensive one. In the case of the Outlaw, that drone costs less than $10,000 per unit—and there are other drones available that cost far less than that. Indeed, terrorist and insurgent groups such as ISIS have been using very cheap commercially available quad-copters during combat operations in Iraq and Syria. Meanwhile, a single Stinger missile costs roughly $40,000. Clearly, the cost-exchange ratio is on the enemy’s side.

It makes little sense to shoot down a $200 quad-copter with a $3.4 million Patriot missile as one U.S. ally—likely Saudi Arabia—did or even with a $40,000 Stinger missile.

“In fact, if I'm the enemy, I'm thinking, 'Hey, I'm just gonna get on eBay and buy as many of these $300 quadcopters as I can and expend all the Patriot missiles out there,'” Gen. David G. Perkins, commander of the U.S. Army Training and Doctrine Command, said at the Association of the U.S. Army's Global Force symposium in Alabama in March earlier this year.

The Pentagon is going to have to figure out a cheaper solution to countering the problem of defeating small low-cost drones. Current weapons are simply too expensive and the cost-exchange ratio is too ridiculously lopsided. The Pentagon is working on some potential solutions—but it will take time and effort to make it happen. In the meantime, the problem will only grow more acute.