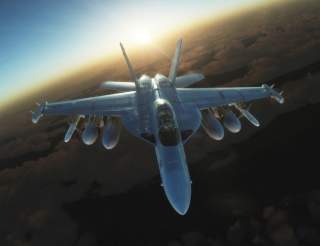 Last week, Raytheon was awarded a $1 billion contract by the U.S. Navy to continue its work on Increment 1 of the Next Generation Jammer (NGJ). This continued what has been an impressive winning streak for the company on major acquisition programs. In winning the NGJ, Raytheon beat the long-time incumbent in the airborne jammer business, Northrop Grumman.  In 2013, it won the contest to design and build the Air and Missile Defense Radar, a replacement for the venerable Aegis radar that had been the centerpiece of U.S. Navy’s air and missile defense capability for decades.

In a tangentially related area, last September Raytheon won a $1 billion five-year contract to provide enhanced cyber protection for some 100 civil agencies and departments of the U.S. government. In 2014, Raytheon, a latecomer to the subject, beat Boeing for the right to build the Family of Advanced Beyond Line-of-Sight Terminals (FAB-T) that will provide secure strategic and non-strategic command, control and communications that support the President and his combatant commanders when they direct nuclear and tactical forces.  Most recently, the company won against a strong field of competitors to build the Air Force’s 3-D Expeditionary Long-Range Radar (3DELRR) system intended to provide long-range, ground-based radar for detecting, identifying and tracking aircraft and missiles (the award is currently in protest).

A major reason for Raytheon’s string of successes has been its willingness to make patient investments in critical enabling technologies. The successful NGJ bid was, according to Raytheon sources, the result of the company’s ability to leverage its ongoing investments in airborne radio frequency systems, jamming techniques, combat-proven antenna array technology, and sophisticated, solid-state electronics. Similarly, in the FAB-T competition, Raytheon began far behind Boeing but invested in the people, enabling technologies and processes that allowed it to deliver a superior product at a very affordable price.

My colleague, Loren Thompson has written about Raytheon’s bet on gallium nitride-based technology and its contribution to the company’s recent successes. Gallium nitride provides increased power and sensitivity for systems such as antennas while reducing their size and cost. The company began working in this area some fifteen years ago. Not only did it invest in learning how to design semiconductors and electronic parts using the new materials, but also how to fabricate them. Raytheon alone among the major U.S. defense electronics companies has its own foundry producing gallium nitride-based components. Raytheon’s investment in gallium nitride paid off in the 3DELRR competition, as well as in the program to upgrade the radars of both U.S. and foreign-owned Patriot missile defense systems.

Facing the defense downturn of recent years, Raytheon apparently rejected the strategy of some other defense companies to reduce their expenditures on corporate R&D and focus what resources remained on the near-term. Raytheon leadership repeatedly took risks, betting on advances in a range of materials, components and subsystems to provide it with the know-how to take on major new competitions.

For some years now, the company has been quietly but steadily building its cyber warfare capability, including acquiring a number of small, cutting-edge cyber companies. Other defense companies were limiting their exposure to IT and even cyber in the face of growing competition and the federal government’s tendency to award contracts based on the criteria commonly known as lowest price, technically acceptable. Most recently, Raytheon teamed with Websense, a company owned by Vista Equity Partners, to develop and market advanced cyber defenses to the commercial marketplace under the name Forcepoint.

Even if defense spending trends do not reverse, Raytheon has demonstrated that it is possible to make money by spending it. If there is a rebound in the defense budget, Raytheon will be in a unique position to take advantage of this change.