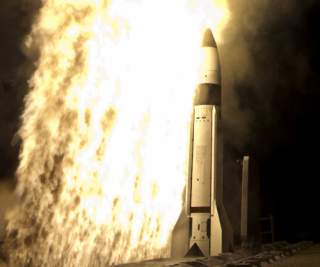 Admittedly, what went wrong with the Joint Land Attack Cruise Missile Defense Elevated Netted Sensor System (JLENS) last October was, in one sense, pretty spectacular. One of the two tethered blimps that carry the JLENS sensors aloft broke free from its leash and, due to a failure of its auto-deflate system, traveled some 150 miles from Aberdeen, Maryland to southern Pennsylvania. As a consequence, Congress cut the funding for the program in the FY 2016 defense spending bill from $40 million to a little more than $10 million. As a result, the program will be prevented from finishing its planned test program intended to demonstrate the utility of JLENS as a means of protecting the National Capital Region.

JLENS consists of two large aerostats carrying long-range radars, one for long-range surveillance and the second to provide precise intercept data. The aerostats are tethered to the ground with an umbilical cord that also provides power to the systems on the platforms as well as a communications link. Unlike manned aircraft, the aerostats can stay airborne for long periods of time, days and even weeks. But operating like an aircraft at about 10,000 feet, JLENS can look out to about 550 km and track hundreds of targets at one time. Its range provides critical advanced warning, cueing for defenses and, most particularly, what the military calls fire control quality targeting solutions, meaning that an air or missile defense interceptor can be launched based solely on JLENS data.

Ironically, the problems for which the JLENS was penalized had nothing to do with the essential function of the system. By all public reports, the JLENS system was operating almost flawlessly prior to the accident. The JLENS, designed to detect low-flying cruise missiles and aircraft at relatively long ranges also is capable of detecting artillery rockets, warships, small boats and even vehicles on land. Over a protracted test program at the White Sands Missile Range, part of the Southwest Defense Complex, JLENS not only demonstrated the ability to detect and track multiple airborne and ground-level targets, but provided fire control data to both an Army Patriot battery and Navy Aegis air defense system which shot down a test missile and airborne target respectively.

The U.S. military desperately needs the capabilities provided by JLENS. A single system deployed in Bahrain, for example, could cover the entire Arabian Gulf. This is why the former head of Central Command, General James Mattis, signed an urgent operational needs statement for the system in 2012. In the Western Pacific, a string of a half dozen JLENS systems deployed along the Second Island Chain would provide highly accurate surveillance and targeting of the entire region. JLENS would be an effective complement to current and planned airborne surveillance systems such as the Air Force’s Joint Surveillance Target Attack Radar System (JSTARS). It would substantially enhance the lethality of existing air and missile defenses.

Developmental programs always experience problems. Many of these are much more severe than what JLENS experienced. Congress usually exhibits greater tolerance for a program’s teething problems. The decision to gut funding for JLENS was misguided, at best, and dangerous to the security of the country, at worst. The advanced air and missile threat is growing. Russia has just announced that it will deploy the Klub land-attack cruise missile on its newer attack submarines creating a potential first strike threat to the National Capital Region. China is deploying antiship cruise missiles on its newly created islands in the South China Sea. Cutting $30 million from the JLENS program is the height of foolishness.

The Army is looking to other sources of funding for the money needed to complete the three-year test program. But Congress’s decision will cause at least a one-year delay in the program. This gives the Army time to buy a stronger leash for JLENS.