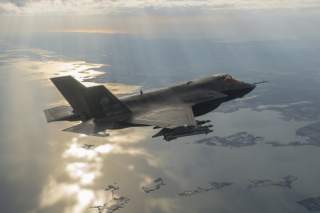 The Navy is accelerating efforts to better network sensors to weapons systems so that missiles, drones and ship-based weapons systems can locate and destroy targets at distances “beyond-the-horizon.”

Raytheon will further develop sensor, radar and “detect-control-engage” technology through a second extension of its Cooperative Engagement Capability (CEC) contract.

“CEC is a sensor netting system that significantly improves battle force anti-air warfare capability by extracting and distributing sensor-derived information such that the superset of this data is available to all participating CEC units,” a Raytheon statement said.

CEC is an integral aspect of key emerging ship-defense technologies aimed at “netting” sensors and radar technologies in order to better identify and destroy approaching threats such as anti-ship missiles, drones and enemy aircraft.

NIFC-CA technology, which has used both an F-35 and E2-D Hawkeye as an airborne sensor to track and relay threat information, connects to a ship-based fire-control system able to launch an SM-6 to intercept store threats at further distances the ship defenses were previously able to do. NIFC-CA has previously been utilized with an E2D Hawkeye surveillance plane, but the Navy recently conducted a successful test using an F-35 as the airborne relay sensor.

With an active seeker, an SM-6 is able to send an electromagnetic signal or “ping” forward from the missile itself; by not needing a ship-based illuminator, the missile can use its own integrated “active” seeker technology to better pursue moving or fast-changing targets while in flight.  Analyzing electromagnetic energy traveling at the speed of light, ship-based radar, fire-control and computer systems assess the return signal to determine the shape, size, speed and distance of an approaching threat.

As part of what the Navy calls Baseline 9 Aegis radar technology, almost every destroyer in the fleet will be integrated with NIFC-CA. In addition, many analysts and weapons observers have made the point that NIFC-CA could also be quite useful for offensive attack operations.

Aegis can, of course, assist ships with longer-range ballistic missile defense technology using weapons such as an SM-3. For nearer in threats, however, Aegis radar can help integrate with an SM-6 to better protect surface ships from attack.

Connecting sensors together with CEC, quite naturally, is key to this process – thus underscoring the continued Navy emphasis upon emerging computer processing speed with this second contract.

CEC connects with the Raytheon-developed Ship Self Defense System, which is used on most classes of Navy ships including amphibious transport dock warships such as the USS San Antonio (LPD 17) and USS New York (LPD 21)), Raytheon information explains.

“A Navy strike group has a variety of sensors to identify threats, including surface radars, sonar and airborne sensors, along with weapons systems that can engage a threat at various distances. CEC is the integration layer that moves data from the sensors to the appropriate weapon systems, creating what military strategists call an end-to-end, detect-control-engage capability,” a Raytheon statement explained.

“Our job is to make the large network picture better, without hurting the picture from an individual ship," Michael  Vagle. chief engineer for the U.S. Navy's Cooperative Engagement Capability, said in a Raytheon statement.  "To do that, we have a system kernel that doesn't change, and an adaptive layer for interfacing with different sensors. The decisions and trade-offs in how the data is used make it interesting from an engineering perspective."

As a sensor “netting” technology, CEC is also quite consistent with the Navy’s current “distributed lethality” strategy – an effort to better arm the surface fleet with offensive and defensive weapons technologies. The “distributed” aspect is designed to allow for more expansive dis-aggregated operations so surface ship sensors, radars, radios and communication system can better network over larger distances. Furthermore, greater distribution of the surface force is designed to prevent groups of ships from being targeted by the enemy.

Work on the contract will be performed in St. Petersburg, Fla., and is expected to be completed in September 2017. The contract will include design elements as well as engineering.