Raytheon's Plan to Protect Many of the U.S. Navy's Most Critical Warships 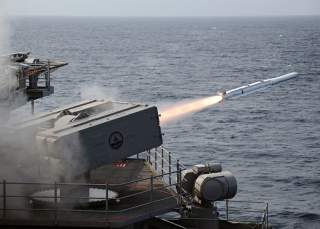 The ESSM Block 2 will protect destroyers, amphibs and carriers by destroying approaching enemy fire such as anti-ship cruise missiles.

The ESSM Block 2 is engineered with what’s called an active guidance system, meaning the missile itself can achieve improved flight or guidance to its target by both receiving and actively sending electromagnetic signals, said Raytheon officials.

The ESSM uses radar technology to locate and then intercept a fast-approaching target while in flight; the use of what’s called an “illuminator” is a big part of this capability, Raytheon officials said.

Block 2 relieves the missile from the requirement of having to use a lot of illuminator guidance from the ship as a short range self-defense, senior Navy officials have said.

A shipboard illuminator is an RF signal that bounces off a target, Raytheon weapons developers have explained.  The antenna in the nose in the guidance section [of the missile] sees the reflected energy and then corrects to intercept that reflective energy, the Raytheon official added.

Also, the missile is able to intercept threats that are close to the surface by sea-skimming or diving in onto a target from a higher altitude, Navy officials explained.  The so-called kinematic or guidance improvements of the Block 2 missile give it an improved ability to counter maneuvering threats, Navy and Raytheon officials said.

“The ESSM Block 2 will be fired out of more than 5 different launching systems across the NATO Seasparrow Consortium navies.  This includes both vertical and trainable launching systems,” Eng added.

U.S. Navy weapons developers are working closely with NATO allies to ensure the weapon is properly operational across the alliance of countries planning to deploy the weapon, Eng explained.

“The ESSM Block 2 is currently in the Engineering and Manufacturing Development (E&MD) phase. The ESSM Block 2 will be integrated with the various combat systems across the navies of the NATO Seasparrow Consortium nations,” Eng said.

For instance, may ships have Aegis Radar and SM-3 missiles for long-range ballistic missile defense. Moving to threats a litter closer, such as those inside the earth’s atmosphere such as anti-ship cruise missiles, enemy aircraft, drones and surface ships, the Navy has the SM-6, ESSM, Rolling Airframe Missile and SeaRAM for slightly closer threats.  When it comes to defending the ship from the closest-in threats, many ships have the Close-In-Weapons System, or CIWS, which fires a 20-mm rapid-fire Phalanx gun toward fast approaching surface and airborne threats.