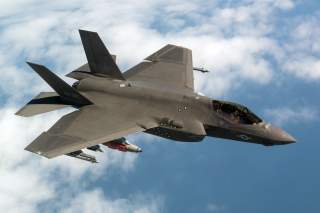 This last flight test marks the beginning of the end of the SDD phase, which started 2001 when Lockheed’s X-35 prototypes triumphed over Boeing’s ungainly X-32 concept aircraft after a hotly contested fly-off. Moreover, this last sortie marks end of a flight test program that first started in 2006 when the first F-35A test article (AA-1) took to the sky.

“Completing F-35 SDD flight test is the culmination of years of hard work and dedication from the joint government and industry team,” Vice Adm. Mat Winter, F-35 Program Executive Officer, said in a statement. “Since the first flight of AA-1 in 2006, the developmental flight test program has operated for more than 11 years mishap-free, conducting more than 9,200 sorties, accumulating over 17,000 flight hours, and executing more than 65,000 test points to verify the design, durability, software, sensors, weapons capability and performance for all three F-35 variants. Congratulations to our F-35 Test Team and the broader F-35 Enterprise for delivering this new powerful and decisive capability to the warfighter.”

Lockheed Martin is understandably proud of finally completing a key portion of what is the most complicated and difficult combat aircraft development program in aviation history. “The F-35 flight test program represents the most comprehensive, rigorous and the safest developmental flight test program in aviation history,” Greg Ulmer, Lockheed Martin’s vice president and general manager of the F-35 program, said. “The joint government and industry team demonstrated exceptional collaboration and expertise, and the results have given the men and women who fly the F-35 great confidence in its transformational capability.”

During the totality of the flight test program, the F-35 test team conducted six at-sea detachments and performed more than 1,500 vertical landing tests on the F-35B variant. The F-35 test program also completed 183 Weapon Separation Tests; 46 Weapons Delivery Accuracy tests; 33 Mission Effectiveness tests, which included numerous multi-ship missions of up to eight F-35s against advanced threats. “From flight sciences to mission systems testing, the critical work completed by F-35 test teams cleared the way for the Block 3F capability to be delivered to the operational warfighter,” Lockheed said in a statement.

The SDD phase will formally come to a close following the F-35’s successful completion of Operational Test and Evaluation and a Pentagon decision to go into full-rate aircraft production. However, F-35 flight-testing will not end there.

Indeed, flight testing—as is the case for all military aircraft—will continue throughout the service life of the F-35, which could continue past 2070.